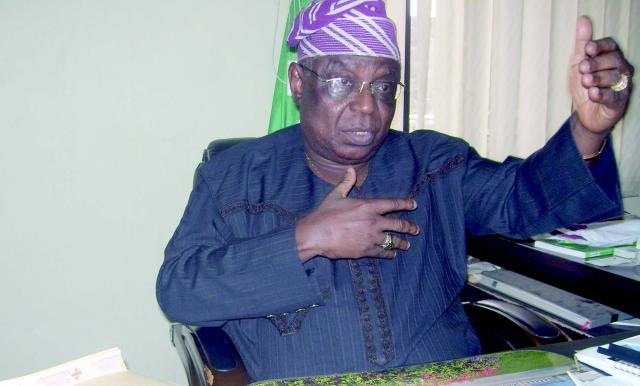 Share this on WhatsApp
Spread the love
By Boluwatife Ezekiel Olaleye
The Lagos State Chairman of the All Progressive Council (APC), Chief Henry Ajomale, has described a former Vice President, Atiku Abubakar as a political chameleon who should not be taken seriously.
Ajomale was reacting to Atiku’s recent defection from the APC to the PDP in an interview with Sun, where he also said the ex-VP’s exit is a good riddance to bad rubbish.
He further stated that Atiku will polarize the PDP more, adding that he spends his money renting crowd.
He said, “Atiku is a political chameleon, he is ever unpredictable. It becomes a tradition for him to be jumping from one political party to another.
“Atiku is not a principled politician. Nobody should take Atiku’s defection serious. It is good riddance to bad rubbish. This is about the third time Atiku would be leaving PDP and going back again to the party. He is not a serious politician.
“Atiku should not be deceived by political hangers-on; he must have realised the bitter truth, and the truth is that, he is politically finished.
“Even in his home state of Adamawa, Atiku has become a laughing stock. His defection to PDP, to us in APC, is good riddance to bad rubbish. Atiku has no political value again.
“He has nothing to offer again. I even pity Atiku for going back to PDP, because PDP as of today has become a divided house.
“By going back to PDP, Atiku is going to cause more crisis for the party. PDP is going to become more polarised with Atiku’s return to the party. Atiku has become a spent-force. I don’t think he has anything to offer anymore.
ALSO SEE: Ekweremadu reacts to Atiku’s return
Speaking on the fears of mass defection hitting APC following Atiku’s departure from the party, the APC chieftain added, “Which mass defection?
“Which mass defection have you seen so far? It is unfortunate that Atiku is being overrated, but sincerely speaking, I hope Atiku should know his own limits.
“Atiku is already politically finished; nobody is going to follow him into PDP, maybe a handful of supporters if anything at all. Do you know what is referred to as mass defection?
“However, let me state this clearly, because Atiku has money and what he usually does is to rent crowd, and most of these people will pretend to be his supporters after collecting money from him.
“Atiku has so much money that he doesn’t even know what to do with the money, and so what he usually does is this, he rents crowd to give impression that these people are his supporters, but Atiku can’t deceive anybody again, except only himself.
“Don’t ever judge the crowd you see with Atiku with his political popularity; the crowd you see with him are rented.”
Share this on WhatsApp