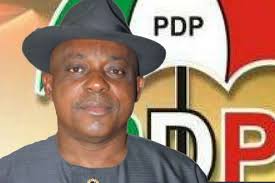 The emergence of Uche Secondus as the new National Chairman of the Peoples’ Democratic Party (PDP) at the weekend has triggered another rounds of crisis in the party following allegations of rigging in the just concluded national convention of the party.

His victory triggered negative reactions following the inclusion of his name on a list which was said to be used to rig the exercise.

Dokpesi, one of the contenders had said the list which was allegedly prepared by some governors was given to many delegates ahead of the convention.

Secondus got 2,000 to emerged winner while Adeniran who came second pulled 230 and Dokpesi garnered 66 votes to come a distant third.

According to Dokpesi, the 21 names of candidates contained in it appeared as number one in all the cubicles for voting.

“Since we started voting about three hours ago, every delegate available was provided with copies of what you have here. They call it ‘Unity List’ and all the names on the list are number one in all the cubicles for voting and this is supposed to be a list prepared by the governors,” Dokpesi had said.

On his part, Adeniran stormed out of the venue of the convention while counting of votes was underway.

He later called for a cancellation of the exercise.

National Daily gathered It was not just Dokpesi and Adeniran who were aggrieved over the situation, many others complained, with a delegate who spoke after Dokpesi at a press conference late Saturday, calling for the “burial” of the PDP.

“Let’s just call for a casket and bury the party,” he had said in anger.

Secondus was once the party’s organising secretary, deputy national chairman, and its two-term chairman in Rivers state.

Nyesom Wike, governor of Rivers state and Ayo Fayose, his Ekiti counterpart, played major roles in the emergence of Secondus.