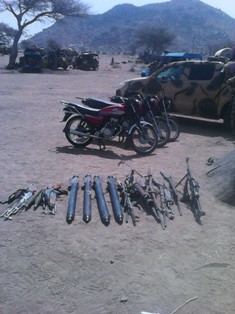 Boko Haram’s bomb makers, known as Amaliyyahs, have been deployed to Rijana, Igabi, and Chikun town in the Southern Province of Kaduna.

The wooded province, PRNigeria quoting internal sources, will provide some sort of concealment for the terrorist now under the leadership of Bokoura Buduma.

Borno, Adamawa and Yobe used to be their theatre of operations.

More intelligence sources at the same time confirmed the ISIS Shura Council, have planned to visit the West African Wilaya of the Islamic State of the West African Province (ISWAP) around the Lake Chad.

ISIS Leader, Abu Ibrahim al-Hashimi al-Quraishi, authorized the visit as part of the group’s effort of reorganizing its global network.

The trip will also provide training, funding, and deployment of more mercenaries to fight in sub-Saharan Africa after.

“They are also to join forces with ISWAP to eliminate terrorists of the Bakoura Faction of Boko Haram,” PRNigeria quoted the sources as saying.

Bakoura has been clashing with ISWAP since he took over the violent group Abu Shekau left.