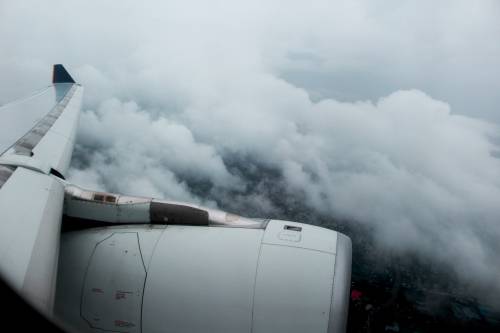 As a result of poor visibility occasioned by Harmattan hays, both foreign and domestic flights have either been delayed or cancelled in the cause of the week.

Cancellations have also affected flights from Qatar Airways, Emirates, Delta Airways and KLM were affected. Flights from Virgin was however not affected.

The delay has negatively affected most business travellers who were rushing to come back to Nigeria to take advantage of valentine sales.

Companies like Air Peace and Arik had to issue weather advisory to passengers as the foggy weather worsened on Wednesday, January 12, 2020. The cancellation of scheduled flight and delays in takeoff have been ongoing for the past two days.

Air Peace’s Corporate Communications Executive, Stanley Olisa and Arik Air’s Public Relations and Communications Manager of Arik, Adebanji Ola both confirmed the delays and cancellation, stating that the actions were necessary for safety.

The poor visibility caused by the harmattan also affects foreign airlines as British Airways was reportedly forced to divert its Lagos-bound flights to Accra, Ghana. Also, American carrier, Delta Airlines, also cancelled its 10:30 pm flight on Wednesday as a result of the foggy weather.

The most affected areas are reportedly Lagos, Abuja, Port Harcourt and Benin, where harmattan presence has been strong. The Director, Consumer Protection Council of the Nigerian Civil Aviation Authority (NCAA), Adamu Abdullahi, had previously stated that such decisions were inevitable.

Abdullahi said due to safety issues, flight delays and outright cancellation were unavoidable in the aviation industry globally. He cited weather, mechanical failure and Very Important Personality movements as factors that could cause delays in the aviation.

He added that “When safety is involved, we don’t discuss comfort and we even encourage airlines to delay or cancel flights whenever they have technical issues or weather-related issues. So, when an airline can prove to us that it delayed a flight due to safety, they are off the hook.”

He, however, said the regulatory agencies should ensure passengers are rewarded for the delay and sanction airlines that don’t fulfill its obligation to passengers in the period of flight delays or cancellation. Meanwhile, the General Manager, Public Affairs for Nigerian Airspace Management Agency (NAMA), Khalid Emele, said, “Our position is that such diversions are in the interest of safety,”.