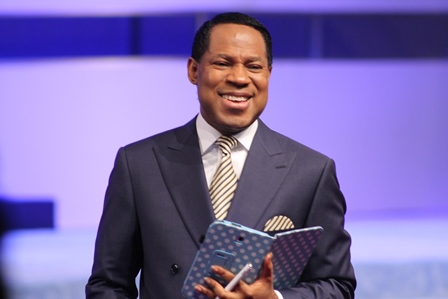 THE Governing Council of Benson Idahosa University, Edo State is set to honour the President of the Believers’ Love World (aka Christ Embassy) Pastor Chris Oyakhilome with a honorary Doctorate Degree in Divinity of the University.
In a letter conveying the notice of the award to Man of God popularly referred to as Pastor Chris, the University said the decision to confer the award on Pastor Chris Oyakhilome was that of the President and Council of the Institution as a result of his immeasurable contribution to nation building and spreading of the Gospel of our Lord Jesus Christ.
The statement which was signed on behalf of the university by its registrar, Rev Mike J. Okagbare also said: “The University Council has approved that a Special Award Ceremony be held in your honour on Friday October 23, 2015 at the Benson Idahosa University Main Auditorium, Benin City, Edo State.
In his acknowledgement and acceptance of the award, the cleric expressed his deep appreciation to the Governing Council and the Senate of the University for their gracious approval to consider him for the award.
Pastor Chris Oyakhilome seized the opportunity of the award to identify with the institution’s vision which he noted remained an icon of courage and dedication to the gospel of our Lord Jesus Christ.
His words: “First, let me express my deep appreciation to the Governing Council and Senate of the university, for their gracious approval for the conferment of this degree on me. I especially thank them for their service and commitment to the vision of the Archbishop Benson Idahosa, who remains an icon of courage and dedication to the Gospel of our Lord Jesus Christ. The seed which he planted has nurtured under their guidance and has flourished through their wisdom and leadership.”
It will be recalled that Pastor Chris Oyakhilome was recently honoured by Ambrose Alli University (AAU) with Doctorate Degree of Science honoris causa at a Special Convocation Ceremony.
Through an anointed ministry spanning about 30 years, Pastor, teacher, healing minister, television host and bestselling author President of BLW also known as Christ Embassy has helped millions experience a victorious and purposeful life in God’s word.
He is the author of the bestseller Rhapsody of Realities, the number one daily devotional around the world. Several millions of copies of the best-selling daily devotional and Bible-study guide have been distributed in over 300 countries in over 602 languages of the world including Afrikaans, Arabic, Cantonese, Croatian, Dutch, English, Finnish, French, German, Hindi, Icelandic, Italian, Mandarin, Myanmar, Portuguese, Russian, Spanish, Swahili…and still counting! New languages are added regularly, making the devotional accessible to many more in different parts of the globe, thus bringing the richness of God’s Word into their lives. Little wonder the devotional, oftentimes, is referred to as the, “Messenger Angel”.
Presiding over an ever-widening network of Christ Embassy Churches and campus fellowships on all five continents, Pastor Chris also pastors one of the largest congregations in Africa. He holds massive teaching and healing crusades like the Higher Life conference and Night of Bliss with crowds of over 3.5 million in a single night’s event.
The world renowned Healing School is a ministry of Pastor Chris which manifests the healing works of Jesus Christ today, and has helped many receive healings and miracles through the gifts of the Spirit in operation.
Pastor Chris Oyakhilome in the year 2003, pioneered the first 24-hour Christian Network from Africa to the rest of the world, and this has given rise to three satellite stations, the LoveWorld TV in the UK, LoveWorld SAT in South-Africa and LoveWorld PLUS in Nigeria and still counting. Through this medium, millions of people have been reached with the beautiful message of salvation and many lives have been transformed . These stations are also available on the mobile platform.
Pastor Chris is also the host of “Atmosphere for Miracles”, a programme airing on major television networks in the United States of America, the United Kingdom, Asia, Europe and around the world, which brings God’s divine presence right into the homes of millions around the world. With a burning desire to bring God’s word to all men in simplicity and with the power of the spirit, the man of God, Pastor Chris Oyakhilome, established the International School Of Ministry, specifically to train and equip ministers of the gospel of Christ, building in them the realities of God’s word and empowering them to carry the message of eternal life in Christ Jesus to their world, with great demonstration of the miraculous power of God.
Pastor Chris also pioneered the establishment of the Inner City Mission of Christ Embassy, a ministry to children living in the innercities of our world, to give them a hope and a future.