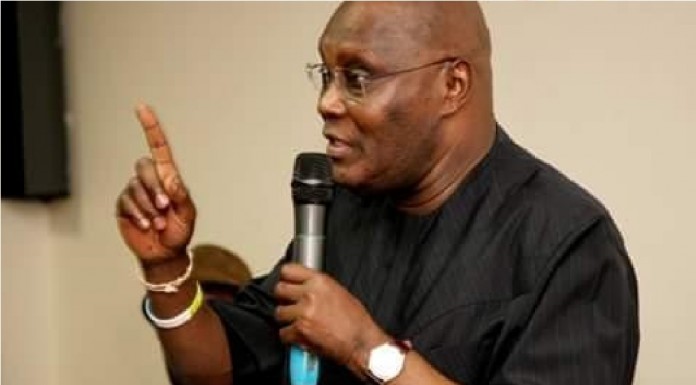 Former Vice President Atiku Abubakar has declared that the Boko Haram insurgency would not be a challenge to the country if he was President of Nigeria.

Abubakar said this in Yola at the distribution of relief materials to over 50,000 Internally Displaced Persons (IDPs) at American University of Nigeria (AUN) drawn from all over IDPs camps across Adamawa State.

The distribution was part of programmes lined up to commemorate Atiku’s 70th birthday celebrations.

The relief materials were also distributed at Saint Theresa Catholic Church and the Jamatu Nasrul Islam Headquarters in Yola.

According to Atiku: “If you recall, while we are in office in 2002, such a small uprising ,very similar to this Boko Haram, reared their head in Yobe State. We smashed it immediately.

“So I think it requires a steadfast leadership, a leadership that is decisive.”

Atiku stated that he would have used all at his disposal to ensure that Boko Haram did not strike in any part of North-Eastern Nigeria and other places in the country.

Atiku regretted that Boko Haram took over seven of the 21 local government area of Adamawa, adding that what he did to prevent Boko Haram from completely over running Adamawa State is between him and Almighty God.

The Turaki Adamawa stated that the Adamawa Peace Initiative was put together to ensure peaceful coexistence of Adamawa State and its people.

In her remark, President of the American University of Nigeria (AUN) Margie Ensign lauded the philanthropic efforts of Atiku Abubakr for sustaining Adamawa Peace Initiative for almost five years since creation.

“Nobody ever assisted us within the period under review, in providing succour to the vulnerable like Atiku did,” she said.