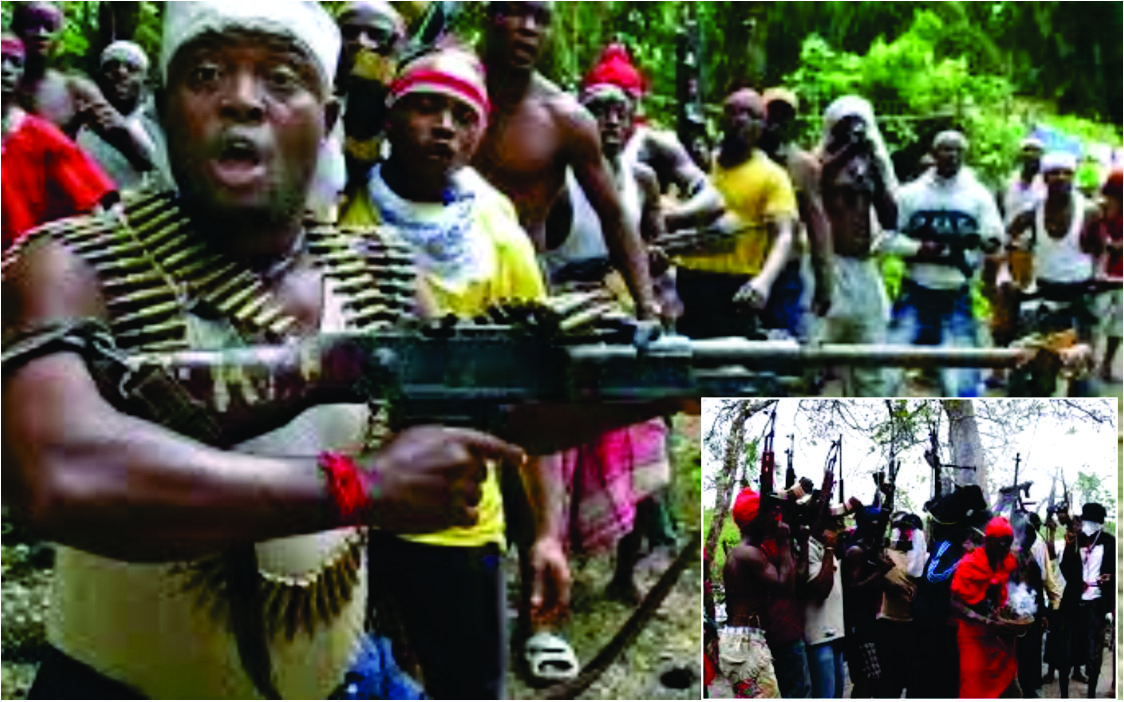 AMIDST growing tension and heavy militarization ation of the Gbaramatu/Escravos Waterways by the Armed of Forces, leaders of the dreaded Iduwini Volunteer Force (IVF) in the Niger Delta have issued fourteen (14) days ultimatum for the Federal Government to reverse the purported cancellation of the Federal University of Marine Technology, Okerenkoko in Gbaramatu Kingdom, Warri South West Local Government Council, Delta State, or be ready for another show down with the Freedom Fighters in the region.
Rising from an enlarged emergency meeting at the weekend held at one of their creeks military commands in Ekeremor Local Government Council of Bayelsa State, the Commander of the Iduwini Volunteer Force (IVF), Commander Johnson Biboye, said that “the decision of the Federal Government, through the Minister of Transport, Chibuike Rotimi Amaechi, former Governor of Rivers State, and a citizen of the South-South, to cancel the license of the Maritime University can best be described as the height of political rascality taking too far”.

Commander Biboye remarked that the meeting deliberated on serious national issues, especially, as they affect the corporate existence of the Nigerian State and the people of the oil rich region of the South-South and advocated that the APC-led Federal Government should work for sustenance of democratic tenets towards promoting national integration and national interests rather than doing things that can destroy the democratic fabrics of the country.

Commander Biboye stated that the enlarged meeting resolved that “if at the end of the 14 days ultimatum and the Federal Government is yet to see reasons to withdraw this anti-people, anti-democratic and anti-educational development policy, Iduwini Volunteer Force (IVF) will be left with no option than to direct its fighters to put machinery in motion and fight everything that is working against the interest of the Izon people and entire South-South region.” He admonished the federal government not to make the mistake of taking the freedom fighters for granted with its military presence in the region, adding that no one can intimidate them from fighting the right of the people and the region.

Corroborating the Iduwini Volunteer Force (IVF) position, spokesman of the Third Face Amnesty Programme, General Ebiowei Perekebena, a.k.a General Hot Water, told National Daily that the meeting drew participants from the six States of the South-South which include Edo, Delta, Bayelsa, Rivers, Akwa-Ibom and Cross Rivers. He declared that the meeting condemned in strong terms, the Federal Government’s decision to close down the only University in Izon Riverside Community of Okerenkoko; agitating that this is not only an invitation to fresh hostilities in the Niger Delta but a slight on the educational advancement of all those who treasure education in civilized world.

General Hot Water questioned the rationale behind the closing down of the Maritime University when very many other universities established the same time and located in other parts of country are still operational. “Do we have two sets of laws in this country or is the Federal Government of Nigeria declaring war against the Izon people,” he protested.

“It beats our imagination that a case of pipeline vandalization by unknown people will overnight metamorphose into heavy military siege on our land and eventual closure of university established by law,” General Hot Water further said.