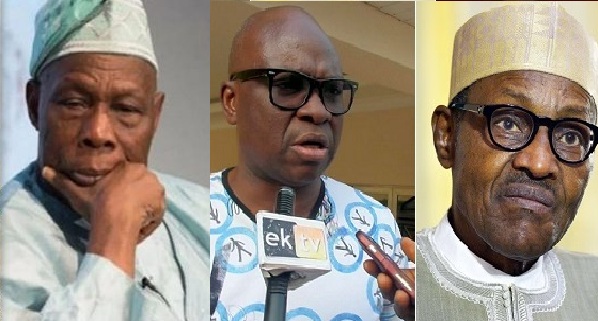 The National Broadcasting Commission (NBC) says it will sanction the Ondo State Television Service (OSTS) for broadcasting hate speech against Ekiti State Governor, Ayodele Fayose, during the governorship elections in the state.

The Director-General of the commission,Ishaq Modibbo-Kawu, told the News Agency of Nigeria (NAN) on Friday in Ilorin that NBC would not tolerate impunity as the 2019 general elections approached.

He assured that the commission would be neutral and apolitical in the discharge of its statutory duties including the enforcement of the National Broadcasting Code.

“From the Ekiti elections, one interesting thing played out.

“We discovered that in a neighbouring state, Ondo, a broadcast station there, the Ondo State Television Service, was broadcasting hate speech against Ekiti Governor, Ayodele Fayose

“For us in NBC this is against the national broadcasting code and we are going to be sanctioning that particular station.

“We do not pick and choose which station to sanction. We monitor all radio and TV broadcasting stations in the country, and when you flout the code you are going to be sanctioned.

“On a quarterly basis, we will bring out the list of those we had sanctioned and the reasons, and post it in our website and distribute to media houses,” he said.

Mr Modibbo-Kawu said the commission recently studied the contents of live broadcast of political rallies and discovered that politicians from both the ruling party and the oppositions were guilty of hate speech.

He said broadcast stations would, henceforth, be held liable for such infractions against their practice code.

“Politicians tend to just say anything on air, they demonise the opponents, they profile them and say the most horrendous things.

“The political parties are not our licensees, so we cannot hold them liable. However, the TV stations that broadcast the rally live has an obligation.

“We are issuing the report on the studies to the government, political parties and broadcast houses that if you broadcast live materials that flout the national broadcasting code, you are going to be held liable.

“They have to get their acts together and begin to discuss with the people who come to pay heavy sum of money to do live broadcast, that there are certain things you cannot say,” he said.

The director-general said ahead of the 2019 general elections, the NBC had become particularly visible, sensitising its licensees to their responsibilities to the nation and the need to respect regulatory code.

“For instance, elections are coming very soon in Osun state. Two weeks ago, we were in the state, met the stakeholders – all the broadcast stations, political parties and security forces.

“We held a one-day workshop to emphasise the importance of adherence to the code.

“We have a responsibility to our country, to help to use broadcasting to assist the Nigerian people to make informed choices among the different political parties.

“But, we should not use broadcasting to cause confusion in our country. One of my pet phrases is that we must first have a country, before we have broadcasting,’’ said Mr Modibbo-Kawu.

The director-general recalled that in the build up to the Ekiti State governorship election, the commission ended up sanctioning a couple of stations especially the state owned broadcast stations there.

“We were forced by the circumstances of the actions taken there to close the Ekiti Broadcasting Services (EBS).

“First of all, the state government had appointed the DG of the EBS as the DG of
Campaign of one of the political parties.

“The appointment was not in consonance with the objectives of the NBC, so we wrote a letter to the broadcaster and the governor of the state, but they ignored us.

“Secondly, when President Muhammadu Buhari visited the state, the governor made a broadcast that the people should not turn out to receive the president.

“This was beyond politics, so we sanction the station,” he said.

“Soon after the elections, before INEC announced the results, the state governor went to radio and television to begin to announce his own results.

“We felt that was the point we had to act and we closed another station”.

Mr Modibbo-Kawu said NBC also closed down a station which was on test transmission, but engaged in political broadcasting against the national broadcasting code.