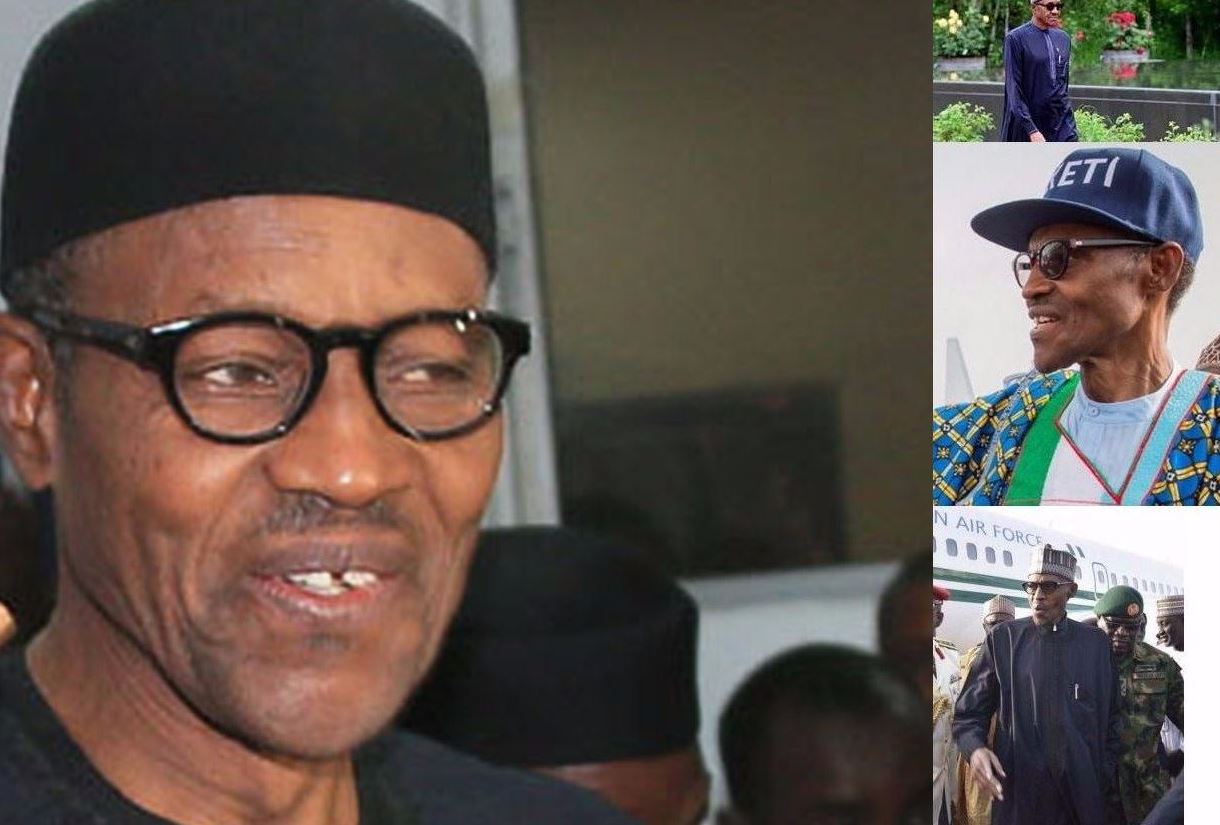 A cat with nine lives, Buhari has proved old soldiers never die. But the president’s men won’t let him live

President Muhammadu Buhari has spent 54 days on his recent medical vac in the UK nursing any one of: a prostate cancer—based on his medical history in 2011; or his internal organs pooping out—reckoning with a version the media traced to First Lady Aisha; or some doodah—going by the say-nothing press releases Garba Sheu and Femi Adesina have been churning out.

Something is, however, certain: in the over 110 days spent in the UK on three occasions this year, the No. 1 citizen has been under the knife at some points; and his recovery so far is nothing to clink glasses about.

But Buhari is still above ground.

The Moslem community got lots of hearts and flowers from him last Sunday during Eid-el-Fitr.

“My greetings to all Nigerian Muslims and our brother Christians on the occasion of Eid-el-Fitr,” he said in a 96-word letter his senior media aide Sheu said his boss sent from London.

The irony of it is Aso Rock keeps urging Nigerians to pray harder for the president.

The sick rarely need so much prayer except when they slide into the twilight zone. And with the intensity of medical procedures the president is going through, and the flurries of prayers pouring in by the day from Borno and Katsina, you can’t safely say he’s as fit as a fiddle—as to do an audio post, or tweet a sallah message, or fire off a letter directing Acting President Yemi Osinbajo to sign memos. Sahara Reporters has even quoted some aides saying the president spaces out each time he takes certain medications.

And, true, delirium, many think, is hardly a sign of ruddy health.

So chins are wagging.

Toyin Daodu, a citizen advocate, said he and millions of other Nigerians believe Buhari is badly battered—and, probably, down for the count. “Despite all his intentions, he is now incapable of discharging his duties,” said Dawodu, who claim he’s a big fan of the president.

But the president’s men—his Chef of Staff Abba Kyari and cousin Mamman Daura—want Nigerians to believe Buhari is still in charge, running a tight ship.

Critics believe a picture of his could have told the story better. But Aso Rock hasn’t found a convenient time to release Buhari’s recent photo ops. No toothy smile or face even to the sallah messages.

The audio version, recorded in Hausa, and garbled in few words, in one minute and six seconds, too, has been dismissed as a spoof.

Many Nigerians couldn’t take it—that Buhari, so worn down by pill popping he has scarcely spoken with Osinbajo since he left May 7 would now belt out a sallah message, for the first time, and that in Hausa.

And that hack, unfortunately, didn’t wash.

“Other than propaganda, I wonder what they intend to achieve by putting out such an audio clip at this time,” said Junaid Mohammed, one of Buhari’s chronic critics.

The Pentecostal Fellowship of Nigeria in Enugu was not impressed, either. “Nigeria has more than 250 languages, so, how can the president address a section?” Godwin Madu, the group’s chairman said. “We are asking him whether he is still president of the entire country.

Again, neither the text nor the audio dropped any hint about his return. A lot hangs on that currently. By his return, the truth about his health will heave into sight. And the path Nigeria should go will get much clearer.

But Buhari’s homecoming, either in weal or woe, doesn’t sit well with some “Asocrats”—and a couple politicians.

Kyari has proved all along—with his fronting and micro-managing—that he wears the breeches at the Villa. Apart from making the cabinet members report to him, the CoS also determines whom the president sees. And if Kyari, for any reason, hates your nose, grass, aides say, may grow under your feet waiting at Aso Rock.

EFCC’s boss Ibrahim Magu had a first-hand experience of this when he wanted to see Buhari following a storm of allegations to make his confirmation difficult last year. He had to wait it out at the Mosque before he eventually met the president. Suspended Hon. Abdulmumin Jibrin, too. He never got a moment to present his case before his president and party leader when the kid honourable stirred the hornet’s nest blowing the whistle on the House of Reps in 2016. Yet Speaker Yakubu Dogara, the man at the centre of the budget padding scandal, was a fixture at the presidency.

Aisha, also, has her story to tell—of certain twosome that have pocketed her husband.

“Yes, I agree,” she told the BBC Hausa Service which put it to her last year. “It is surprising. Nobody thought it is going to be like this.”

Kyari was not just making himself Buhari’s crutches for old-time-friendship’s sake. The stakes are high—looking at what’s in it for him in the long haul. His dalliance with many of his boss’ anti-corruption war targets—corporate and political—has been panning out in millions of dollars.

There are media reports he got kickbacks from tax dodger Jide Omokore, the chairman of the Atlantic Energy Drilling Concepts, caught in the EFCC dragnet in 2016. Omkore racked up $14 million in oil tax debt under the watch of the Goodluck Jonathan administration. And Buhari was going to make him cough it up. Omokore, however, got a soft landing through Kyari.

The CoS took him to meet Buhari—and worked it that the EFCC could not harry the oil tycoon again.

Kyari also featherbedded telecoms giant MTN when the NCC slammed it with a N330-billion fine in 2016. And for his effort, Sahara Reporters said, he got N500 million.

Kyari denied it. So did MTN. The midwife of the back-door negotiation, Amina Oyagbola, however, got the boot from the South African company.

So far, the biggest beneficiary of Kyari’s wire-pulling, critics of the administration believe, is Sen. President Bukola Saraki.
There has been a high-level horse-trading between the Senate president and the CoS.

Magu is the bargaining chip. And the trade-off was the EFCC boss’ confirmation by Saraki’s Senate. Both appear to have mutual hatred for Magu who, some think, has personalised Buhari’s anti-corruption fight. There’s a pact Kyari reportedly made with Saraki—to ensure Magu never gets there—and the Senate president, enmeshed in many corruption allegations, will, in turn, weasel out of them all. Starting off with no fewer than six allegations hanging around his neck in 2015, Saraki is now demystifying the anti-corruption war—one at a time. The CCT has dismissed the false asset declaration suit against him. Other allegations have not even stuck.

Apparently, the duo will be awesome working together, scratching each other’s back. Especially now that information about Buhari’s health is power. And it seems they won’t mind bending the rule, no matter what.

In a sense, they have already violated the Public Service Rule. Skirting the 1999 Constitution won’t be much trouble for them. And they don’t give a damn about the national security fall-out their intrigue can spin off.

Where processes matter, the PSR has spelled all out everything in easy pieces. All their monkey business is not about any grey zone in the cookbooks.

“The applicable PSR 070316 stipulates that the maximum aggregate sick leave which can be allowed an officer, who is not hospitalized, during any period of 12  months, shall be 42 calendar days,” a national security scholar, Ayokunle Fagbemi, said in a press release during the week. But the CoS has made the president spend thrice that number this year at the Nigeria House in London. And nobody knows how many days the 74-year-old has to go—or how he fares.

The clannishness can only spark up wild guesses. “It is possible that President Buhari is being held by his handlers against his will,” said Dawodu.

According to Section 070318 of the PSR: “Sick leave for a period up to three months in the first instance may be allowed on the certificate of an approved HealthCare Provider to an officer who is hospitalized.

“If at the end of that period the officer is still hospitalized, his Permanent Secretary/Head of Extra-Ministerial Office must make an arrangement for him to be examined by a Medical Board with a view to ascertaining whether he should be invalidated from the service or allowed further paid sick leave,” the section concludes.

From here, the Senate president, naturally, has got reason to come in.

But Saraki is already a part of the wheeling-dealing. And this kind of deal thrives in an information blackout. Aside from helping to keep things as they are, the darkness is good for making the phantom of a very sick Buhari haunt Osinbajo acting as president. So Kyari can pass off more of his memos as Buhari’s, and keep Magu on a short leash—for Saraki.

As Dawodu, Fagbemi, and other Nigerians begin to agitate, it’s likely this intrigue won’t last. Many have already seen through the CoS and his political ally.

According to the scholar, it’s a shame. And these men are just ridiculing the old sick man of Aso Rock—by keeping him in power he no longer needs.

History has only repeated itself, though not exactly like the late President Umar Yar’ Adua’s who died in power in 2010.

Buhari’s seems a tear-jacking epilogue of the pulsating story of a tough old cookie who once thought he belonged to nobody.

Now he finds himself writhing in the vice-like grip of his men who can do anything to hog power.