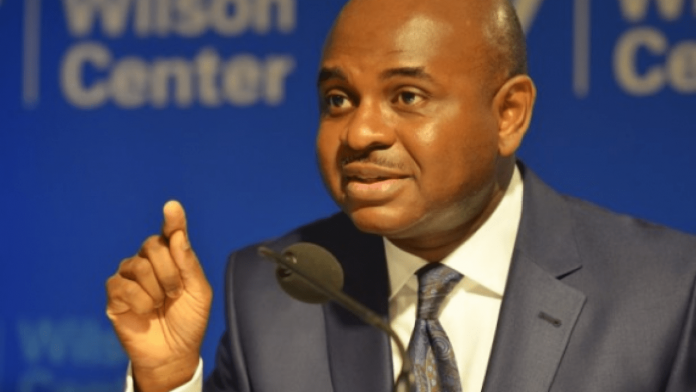 Former Deputy Governor of the Central Bank of Nigeria, Kingsley Moghalu has said President Muhammadu Buhari’s approach to the security threat posed by killer herdsmen, mainly from outside Nigeria, remains a fundamental security to Nigeria.

“As a leader, he must watch his language carefully, and moderate his instincts. I caution that, if he continues on his current path, sweeping real issues under the carpet because he commands the instruments of state-sanctioned violence today, he will be setting up a massive constitutional confrontation between the northern and southern parts of the country that will further destabilize Nigeria.

Moghalu, a former presidential candidate and Convener of Moghalu4Nigeria (M4N) Movement, said Nigeria’s unity should be on the basis of mutual respect, give and take and mutual accommodation amongst all the country’s component nationalities.

Reacting to the arrest of the leader of the Indigenous People of Biafra, Nnamdi Kanu and the violent attack on Sunday Igboho’s residence, Moghalu advised President Buhari to focus the same quantum of energy put into suppressing both men into addressing the root causes that have created them.

“Silencing and criminalizing essentially political agitations against the injustices inherent in the Nigerian state cannot be made the only priority of national security, while real terrorism that daily claims huge numbers of Nigerian lives in the northern and other parts of the country is aided and abetted by state or state-approved actors.

“The injustice and inequity in Nigeria today cries out to the heavens. This injustice is against both Nigeria’s broad mass of citizens of all tribes and tongues at the hands of a selfish and incompetent political elite, and also against specific parts of our country by the Government of President Muhammadu Buhari.

According to him, the most important challenge Nigeria faces today is a failure of leadership, “Contrary to popular opinion in some parts of the country, there is nothing impossible about unifying Nigeria on the basis of equity and justice and creating prosperity for all Nigerians.

“Northern Nigeria, which has produced heads of government for 48 years out of Nigeria’s 61 years of independence, has suffered the most from poverty and, now, insecurity.

“As regards the Southeast region in particular, we must recognize the role that the leadership shortcomings of its political elite has also played in creating current conditions in the region vis-a- a-vis the rest of the country,” he added.