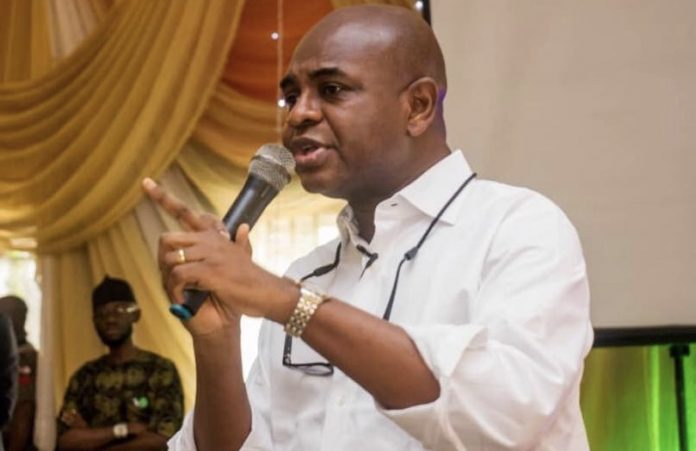 Former Deputy Governor of the Central Bank of Nigeria, Prof. Kingsley Moghalu, says over the past months, debt service cost has taken more 90 percent of government revenue, noting that for every one naira generated in public revenue, more than 90 kobo is used to pay the interest on government’s loans.

Recall that the Senate had on Wednesday approved President Muhammadu Buhari N2.34trn loan request as the country’s debt stock hits N33.1 trillion, raising fears on the rising debt of the country.

Reacting to the rising debt, Moghalu, who is also the convener, Moghalu4Nigeria (M4N) Movement in a statement on Thursday, said the country is now on a dangerous, debt-induced fiscal cliff.

“Put simply, the Government of Nigeria is mortgaging the future of our country’s youth. We have to stop further borrowing and start to manage the current obligations in order to avoid a sovereign debt default or, at best, a costly restructuring. Further borrowing will lead to a disastrous debt bubble bust.

He said the rate at which Nigeria’s public debt has increased in the last six years is unprecedented, alarming, and unsustainable.

According to him, the massive borrowing by the President Muhammadu- led administration, and the infrastructure investment that has been used to justify it, have grossly under-performed.

“And rather than the debt-funded infrastructure projects creating ample numbers of jobs for the citizens, the national unemployment rate has increased to 33.1 percent while youth unemployment has reached 42.5 percent.

“Public-private partnerships should be the dominant approach to infrastructure development in a country like Nigeria, instead of contract awards that, from information available from comparable projects in countries such as Ghana and Ethiopia, are at best overvalued and, at worst, grossly inflated in their costs. But in the real situation of the incompetence of the government in the last six years, businesses have been groaning and FDI inflows have decreased.

“As alternatives to debt, the government needs to focus on increasing domestic revenue, by expanding the tax base – not by increasing tax rates as has been done with the value added tax (VAT) – and by introducing reforms for ease of paying taxes while abolishing multiple taxation.

“When I ran for president in 2019, I said I would introduce a forensic audit of the budgets if elected, as part of a broader reform initiative for transparency and accountability in public finance.

“This remains very important for ensuring value for money and to support public revenue growth by restoring investor confidence in the economy. To realise a positive long-term public revenue outlook, the economy must be successfully diversified through value-added exports.