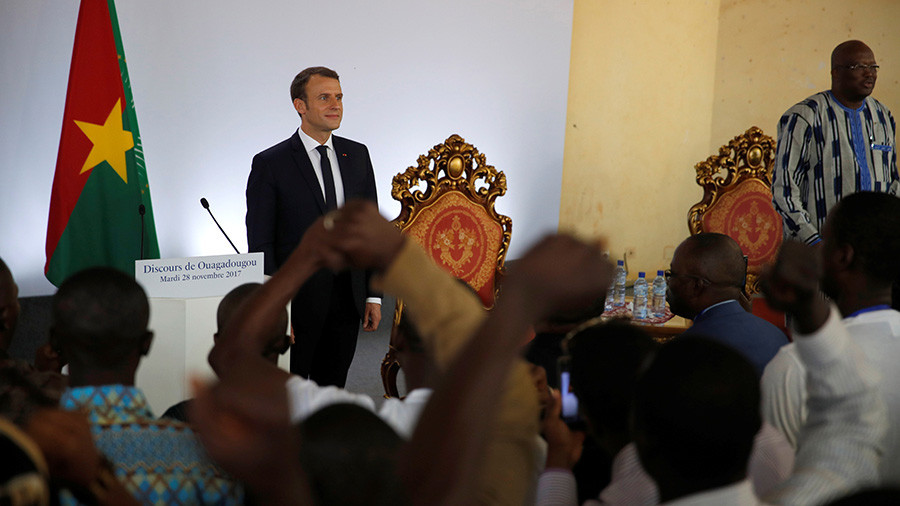 Share this on WhatsApp
Spread the love
President Emmanuel Macron of France has been having a bad time since he touched down in Ouagadougou, following his speeches many believe sounded humiliating.
His host President Roch Marc Kabore received him at the presidential palace while a grenade attack was carried out on French security team on his convoy. The target was missed, but there were three civilian casualty.
“It’s only a grenade, I don’t forget the deaths your people had to suffer yesterday, and in the weeks and months before,” Macron said during a press conference at Burkina Faso’s presidential palace
They both went to the university in the capital city where he delivered a speech badly heckled by students who always resent any French president for their colonial past.
Macron, however, coped well with the hecklers, assuring them he is different.
“I am from a generation that doesn’t come to tell Africans what to do,” Macron said during a speech to university students in the Burkinabe capital Ouagadougou, prompting applause.
“I am from a generation for whom Nelson Mandela’s victory is one of the best political memories.”
A student later asked him questions about electricity problem, and he wondered why such question.
“Sometimes you talk to me like I’m still a colonial power,” the French president said. “But I do not want to deal with electricity in universities in Burkina Faso,” Macron added, smiling.
“It is the work of the president [of Burkina Faso],” he said, pointing at the president who was listening to Macron’s speech from the same stage.
Kabore, probably upset, suddenly stood up and left the room.
ALSO SEE: Uhuru Kenyatta sworn in for second term as Kenyan president
“He’s leaving… Stay there!,” Macron ordered, jokingly. “So he went to repair the air conditioning,” Macron shouted after the president.
Social media users reacted saying the French leader “disrespected” his counterpart. They said Macron displayed “arrogance” and “immaturity.”
“Imagine a foreign country president having such an attitude in France and say the same thing to Macron,” a Twitter user pointed.
Macron will be visiting three nations during his current tour of Africa.
Meanwhile protest continues in Ouagadougou, as protesters carry placards with inscription “Down with France!”, burning T-shirts bearing Macron.
Share this on WhatsApp
Related Topics:Burkina FasofranceOuagadougouPresident Emmanuel MacronPresident Roch Marc Kabore
Up Next