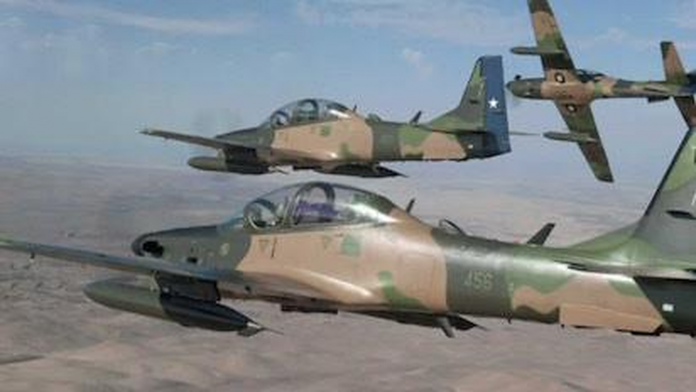 As the federal troop bombardment become unbearable for the terrorists in Zamfara and Katsina, many of them are running helter-skelter all over the northwest forests, and ending up dead.

Hundreds of them found themselves in the middle of nowhere at Maganda, Shiroro LGA, Niger, o Saturday, and the next move they made became all fatal as they ran into Nigerian troops stationed there.

Sources suspected the bandits had no idea of the terrain

The confrontation lasted for several hours, and many of them died while others fled bloodied, leaving arma and ammunition behind.

Six machine guns, a cache of AK-47 rifles, and bags of ammunition were recovered from the bandits.

“In fact from the dead bodies that we saw, they look like foreigners, all of them are carrying long hair like women. They don’t have resemblance of Nigerians and they don’t know the terrain that was why they ran into the soldiers. They did not know that there is a military camp there,” a community member told the Punch.

The menace of the criminals across the northwest came to a head recently, leading to lockdown in many local government areas so the military can unleash maximum force on them.

They have since been running about, some pleading for amnesty since Nigeria’s ared forces introduced Tucano fighter jets into its COIN strategy about a week ago.

Bello Matawalle, Zamfara governor, however, said nothing of that nature again since tey spurned the offer earlier.