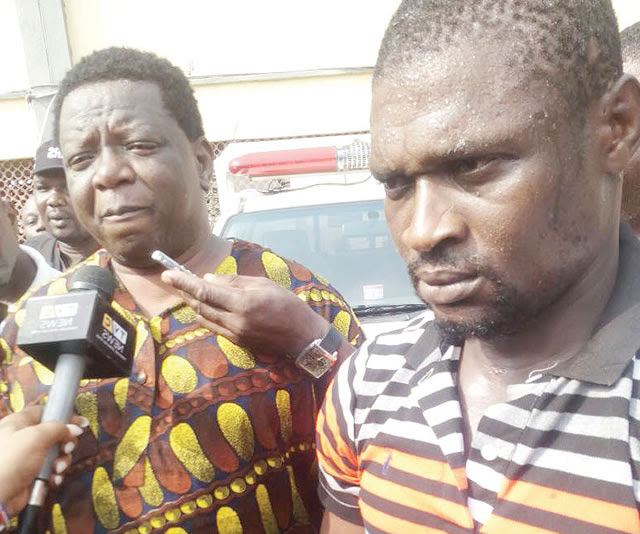 Share this on WhatsApp
Spread the love
Adeola Williams, aka Ade Lawyer, has confessed to killing many people in Lagos for an ex-chairman of National Union Road of Transport Workers, Lagos State branch Akani Olorunwa and for traditional rulers that needed a hired gun.
At least Ade Lawyer took out four people for Olorunwa, 51, who himself claimed his 39-year-old hitman once picked out nine people in a moving bus on Ajah road in Lagos.
His basic tool was AK-47.
The two were paraded on Friday at the Lagos State Police Command headquarters in Ikeja.
The ex-chairman was arrested Thursday while Ade Lawyer was arrested Wednesday in Akure, Ondo State, by operatives of the Inspector-General of Police Intelligence Response Team.
Both are suspects in the murder of Ganiyu Ayinla alias Pinero, the personal assistant to the NURTW chairman in Idumota, Azeez Lawal (AKA Kunle Poly) shot dead January 23 when he was about to enter a car on the island.
Pinero’s death would later be a mistake since Kunle Poly was the target.
The police had arrested four persons in connection with the murder. Their confessions, according to Commissioner of Police Edgal Imohimi who paraded the suspects, led to the arrest of the two suspects.
“One AK-47 rifle with number 3501357, two empty magazines, one black Hyundai Santafee Jeep seized from Olorunwa were recovered from Adeola Williams (AKA Ade Lawyer). Investigation is ongoing and effort is being made to arrest other suspects at large,”said Imohimi.
Ade Lawyer told journalists on Friday that Olorunwa contracted him to kill Kunle Poly and they agreed on N1.5m to execute the plan, and N500,000 was paid cash down.
Ade Lawyer said apart from Olorunwa, he had been hired to kill people in the past by some individuals in the state, including traditional rulers.
“I carried out four killings for him (Olorunwa). During the clash between him and Musiliu Akinsanya, alias MC Oluomo, I killed two people for him. He said Kunle Poly betrayed him and contracted me to kill him,” Ade Lawyer said.
“He told me he brought Kunle Poly into NURTW and that there was a bonus he was entitled to as an ex-chairman of NURTW. He said he used to receive the money, but Kunle Poly blocked the payment.
“He said as a result of that, he did not want to see Kunle Poly anymore. He asked me to meet him somewhere for a discussion, but I told him I didn’t have a car. He personally drove to where I was at Igbosere and we discussed on how to carry out the operation in his car.
“When I was about to leave, he gave me N500,000 and promised to pay the remaining N1m when the job had been done. He said he met with me in person because he did not want anybody to know about the operation. I assured him that nobody would hear about the killing.”
Ade Lawyer explained further that the operation was supposed to be carried out on Tuesday January 22, but was shifted to the following day.
“Unfortunately, we missed our target, Kunle Poly, but killed his PA (Pinero). I called Olorunwa on the telephone to inform him about the development. He started behaving strangely towards  me because I missed the target.
“I later called him with my private line and he said he did not want to talk to anybody for now. I told him not to be afraid and that I wanted the N1m balance,” he added.
Olorunwa sent a Toyota Camry to him as collateral for the balance pending. But Ade Lawyer rejected the car and demanded a Jeep which he got three weeks ago.
But Olorunwa admitted he gave  Ade Lawyer N500,000—not meant for killing Kunle Poly, though.
“There was a time I was travelling to Ede in Osun State, he (Ade Lawyer) called me and said he had an accident along Lagos-Ibadan Expressway. He was disturbing my boys that they should tell me to assist him,” he said.
According to Olrunwa, he did not render the assistance until he travelled to England where he claimed Ade Lawyer peppered him threat messages to me—that if he failed to give him money, he would kill him and his family members.
“When I came back, I called one of my boys and told him about Ade Lawyer’s threats. He advised that I give him something because he is a troublesome person. I then sent him to give Ade Lawyer N500,000 to avoid trouble,’ said Olorunwa.
“I did not send my brother to give him my car. It was my brother who gave him the car on his own. I was sleeping when my son and one of my brothers woke me up. They said Skoda had given my car to Williams (Ade Lawyer).
He said he contacted Abija to help him retrieve the vehicle and Abija promised to do that.
“What made me  fear Williams most was when he shot dead about nine people who were heading for Lagos Island from Ajah in a vehicle. He also killed an NURTW chairman at Oyingbo.”
Share this on WhatsApp
Related Topics:AssassinHitmanNational Union of Road Transport Workers (NURTW)Nigerian Police Force (NPF)
Up Next