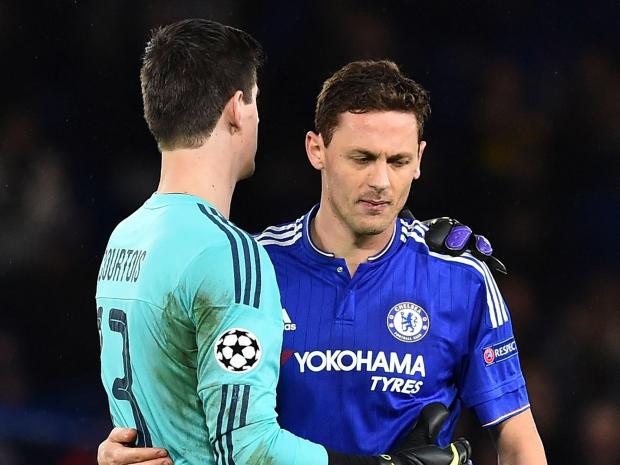 Share this on WhatsApp
Spread the love
By Boluwatife Ezekiel Olaleye
Chelsea goalkeeper, Thibaut Courtois has revealed why the club sold Nemanja Matic to Premier League rivals Manchester United.
Courtois and Matic won two Premier League titles together but they will line up against each other on Sunday as Chelsea welcome Manchester United at Stamford Bridge.
The Belgian said he understands that the Serbian wanted to leave Stamford Bridge.
Matic joined Manchester United for £40 million this summer and he has been in good form ever since his move to Old Trafford, while Chelsea’s midfield has struggled in his absence.
Courtois thinks that Chelsea have sold a quality player in Matic but he understands why they chose to let him go.
He told reporters, “I don’t know. I think we know he has qualities, he is someone that last year, give us the balance as well.
ALSO SEE: Top 6 players with the best scoring ratio in Europe since August 2016
“He decided to go to another team, we won’t live in the past. He decided to leave, he left. Our midfield is very good, we have strong players.
“I don’t know if we miss him but obviously, if you see we have two injuries in the midfield then obviously you could say we missed Nemanja.
“He is a quality player who is doing well at Manchester United. That’s not my decision to make [about selling him].
“Those are questions that you need to ask to the people who made that happen. I think that if a player nowadays wants to go to a team, the player has a strong will to join another team, it is hard and you cannot just ignore him and say you can’t leave.
“Then you have a disappointed player who maybe won’t play at his best. For us, you have given another player to another big teams.
“These are the choices made in football. He is a quality midfielder but hopefully we can show that we are better on Sunday.
Share this on WhatsApp
Related Topics:Chelsea FCChelsea goalkeeperManchester UnitedNemanja MaticThibaut Courtois
Up Next

“Why Madrid lost to Tottenham”