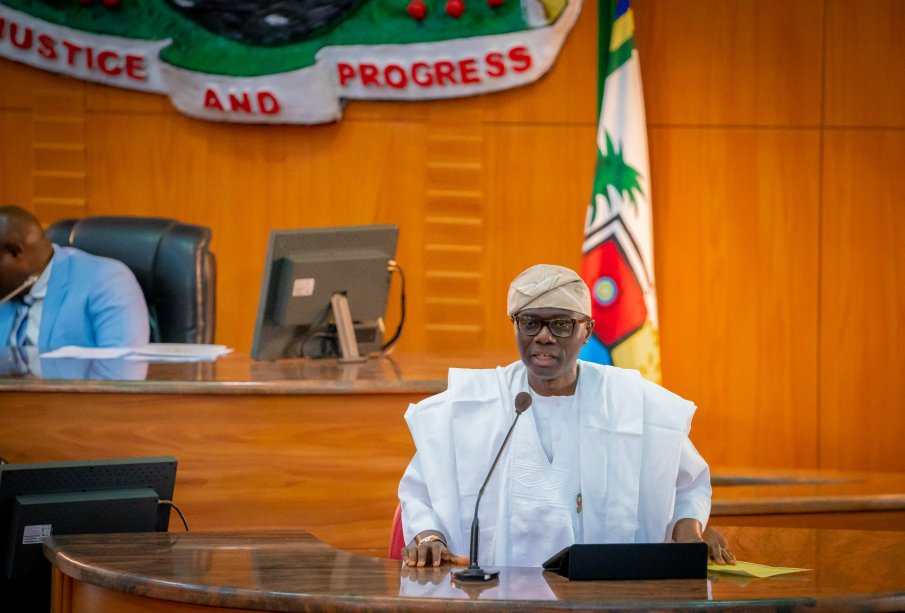 Share this on WhatsApp
Spread the love
By Olanrewaju Adesanya
Lagos State House of Assembly on Thursday clarified the need for the  State Governor, Mr Babajide Sanwo-Olu to co-toe and adhere to the separation of power principle,which demands him to be accountable on funds accruable to state.
The state legislature tasked the Governor to make it a point of duty to recourse back to the House on the spending of donations received to address coronavirus pandemic in the State.
The House also charged the Governor to make recourse to it before declaring a state of emergency even during peculiar situation like currently being experienced on deadly pandemic,COVID-19.
The resolution followed the observation raised by the State Attorney-General and Commissioner for Justice, Mr Moyosore Onigbanjo (SAN) on a recently passed Bill tagged, ‘Coronavirus Pandemic Emergency Law, 2020.”
The executive observed among others on the provisions in the law, directing the Governor to make request to the House before declaring state of emergency and renderimg account to the House on the spending of donations to the State government to address the pandemic.
The Speaker, Rt. Hon. Mudashiru Obasa who presided over plenary stated, “It is not depriving the Governor his power. It is to make recourse to the House.
“It is our own duty to do what is right. It is for them to follow what we do in line with constitution. The law says, they will come come forward to give account on what they have expended.”
Obasa also observed, “If you set up a committee and the Governor is the Chairman, and the House committee later invites the Governor, it will look like a confromtation.
The Speaker explained further that it would be better to introduce a co-chairman from the executive arm on incident command, saying, the co-chairman would be ready to face the House committee.
He argued that “now that we have an emwrgency situation, there must be an independent account set up separately, otherwise something is missing somewhere.”
Earlier, the Chairman House Committee on Health Services, Hon Akeem Shokunle had read the recommendations of the committee on a report that addressed the observations raised by the Attorney-General.
The recommendation stated in part, “With regards to paragraph 3 of the observation, the committeee is if the opinion that it is not an usurpation of power to create a procedure for activating a donated power.
“Section 305 of 1999 constitution which gives the power to declare a state of emergency clearly stipulates the procedure to be followed in exercising that given power.
“The committee also points out that we are all in these together once Mr. Governor communicates his intention to extend the state of emergency to the House, it will expeditiously be dealt with as already stated in section 23(2) of the law.
“Mr. Governor should be mindful of the fact that the funds referred to are funds not budgetted for and it is not in the consolidated fund or development fund, but are donations and grants and since Mr Governor is so mindful of his public image, it is only right that we help him to so do which why the provision of section 4 (2) of the Law is sacrosanct.”
The report titled, “Recently passed Coronavirus Pandemic Emergency Law, 2020 had rejected the some of the proposals by the executive, saying the Governor should be mindful that the funds are not budgeted for.
However, Hon Folajimi Mohammaed had noted that following quarantine Act, the Governor might not make recourse to the House because it demanded urgent action.
But, the Speaker argued that going by the constitutional provision, the Governor would have to come to the house for check to ensure probity.
Share this on WhatsApp
Related Topics:coronavirus (COVID-19) pandemicDonationGovernor Babajide Sanwo-Olulagos state house of assembly
Up Next

After mocking Kyari, ex-commissioner now dogged by series of misfortune, including Covid-19