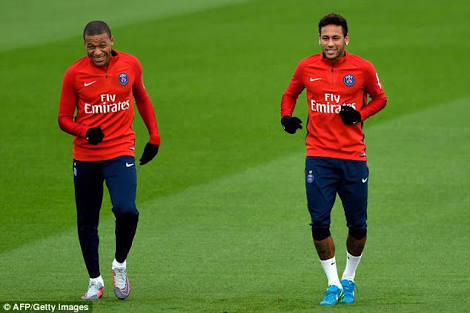 At age 35, Daniel Alves will start his second season at Paris Saint-Germain. And if the club of the capital has engaged, it is largely to transmit to the cloakroom in Paris his incredible experience. The Brazilian has understood perfectly since he does not hesitate to intervene when he considers that a situation can affect the proper functioning of his team. Remember. On September 12, 2017, PSG and its new Mbappé-Cavani-Neymar trio started their Champions League campaign with a landslide victory over Celtic Glasgow in Scotland (5-0). A big success during which the three stars of the attack Ile had found the way of the nets. Good news for a club whose ambitions had been revised upwards thanks to the CMN. But Daniel Alves had already felt the trap tense, even before the publication of the Unes of the French press the next day.
“I do not think football is just a trio. It’s a team sport where there are big names, like the ones we have here to make differences. The trio needs people around for the party to be beautiful, “he said after the meeting in the mixed zone as a first warning. Eager to see the PSG triumph, the international auriverde (107 caps, 7 goals) does not hesitate to use his experience to avoid problems with the CMN. And this is what he has done recently with Neymar and Kylian Mbappé, two highly anticipated players after a 2018 World Cup experienced differently for the numbers 10 and 7 PSG. For his compatriot, the Russian adventure could have been an opportunity to shine after an incredible race against the clock won to return in time following his ankle injury. In the end, Neymar left Russia without the cup, but with a solid reputation as a simulator.
Daniel Alves advises Neymar and Mbappé
A statement that was again verified during the friendly match between Brazil and El Salvador (5-0), after which meeting the captain of the Seleção has pushed a gag, tired of this new status annoying. In an interview with Globoesporte, however, Daniel Alves said that this label stuck to his partner was not unjustified, which led him to talk with him so that “Ney” changes his tune. “Some things have happened in his life to ripen. These things make you realize that you have to work to become a better person and a better professional. When things are not perfect, you must progress, improve, reinvent yourself. I talked a lot with Neymar about it. I think he is aware of that. When you start to become a man, your decisions and your attitude are more posed, stronger. I have no doubt, that’s what will happen to him. I always say that when one or two people criticize, it can be a relentless thing. But when everyone tells you that, it’s because you’re making a mistake. The time has come for it to reinvent itself, to improve. ”
A friendly council that the defender also lavished on Kylian Mbappé. The young world champion has certainly not returned from Russia with a degraded image, but it is not uncommon to see a young player get lost on the road after such a feat. And that, Daniel Alves does not want Mbappé to be a victim. “I think having a world champion in your team gives you more respect, especially among opponents. Everyone has their role to play, but we must not forget the collective. Even if you have been a champion, if no one goes in the direction of the team, no one will achieve their goals. I had a discussion with Mbappé, and that’s one of the things I told him. His challenge is to continue to be a champion because when you win a World Cup, it’s the top for an athlete and he did it by being very young. It’s a big challenge for him: keep winning to write the story. He is a very conscious youth and his family will not let him go astray on the way. We are here to help him too. The message is over.