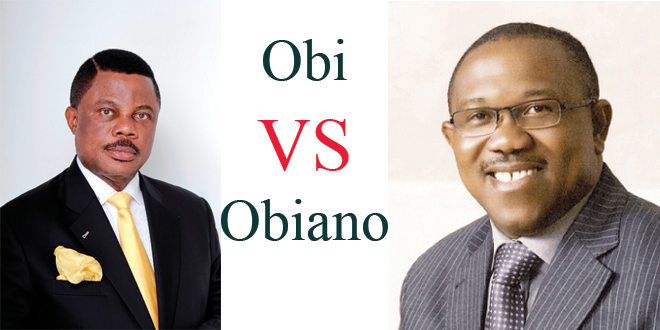 Share this on WhatsApp
Spread the love
Anambra former Gov. Peter Obi has promised to fight like crazy to stop his godson Governor Willie Obiano from winning the November 18 guber poll in the state.
“I will fight in this election aggressively. I will fight with the last drop of my blood. I will fight to win this election the way the PDP has not won any election before,” he said.
Speaking during a stakeholders’ meeting of the PDP in Awka, Obi said he was disappointed at Obiano’s profligacy and clueless administration of the state.
The governor rode on Obi’s shoulder to win his first term victory four years ago. Both of them were in APGA then.
He regretted that all he laboured to put in place in the state in his eight years in office were being destroyed by bad governance.
“If all the money I kept for this (Obiano’s) government, both in dollar and naira were properly utilised and our legacies sustained, Anambra will be on top of other states in development by now.”
He asked his audience to rally round the PDP candidate  Oseloka Obaze.
The former governor pledged to reconcile all aggrieved PDP members in the August 28 primary election of the party.
“I’m the beneficiary of the PDP confusion when I was governor on the platform of APGA. Today, I’m 100 per cent in the PDP. That confusion must end. We must win the November 18 poll; nothing can stop us from doing that.
ALSO SEE: Python Dance is unconstitutional
He boasted he has been defeating incumbent, and Obiano will not be any different.
But Obiano’s media aide, Oliver Okpala, described Obi as a deceit.
“Obi cannot speak from both sides of his mouth. In 2013, he introduced Obiano to the people of the state and said he (Obiano) had the best managerial acumen and political sagacity to take over from him,” he said.
“ Obiano had proved to the people of the state what Obi said about him by his performance that everybody is testifying to. So, what is Obi saying?
“There is no amount of lies Obi will tell about Obiano that will make the people to change their minds about the November 18 poll; they are all for Obiano,” Okpala stated.
Obi, a businessman, was known for his austere style of governance, which helped him save billions, unspent, for the state. Many, including former governor of the CBN, Prof Charles Soludo, criticised him for this.
But the way his successor, a banker, has been spending doesn’t go down well with the godfather who calls it profligacy.
Share this on WhatsApp
Related Topics:Anambra Stateformer Gov. Peter ObiGOVERNOR Willie ObianoGovernorship ElectionIndependent National Electoral Commission (INEC)
Up Next