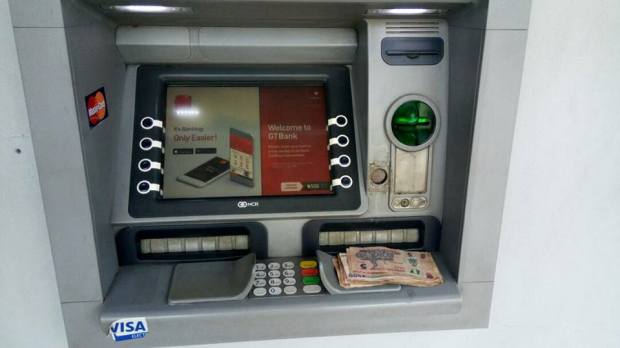 Despite assurances by the Central Bank of Nigeria (CBN) on the availability of the redesigned Naira notes, many Nigerians still lament the scarcity of the notes, saying even ATMs are still dispensing the old notes.

Commercial banks in the last 24 hours have been sending messages to Nigerians announcing the availability of the new naira notes.

In messages sent to their customers on Monday, January 9, 2022, a couple of banks in Nigeria indicated that the new notes can now be accessed on their ATMs.

The banks’ messages followed an order from the Central Bank of Nigeria that banks should load their ATMs with the new notes.

However, investigations still show that ATMs are still dispensing the old notes.

When asked, a senior bank official in Ikotun area of Lagos State revealed that there were not enough of the new notes in the branch.

His statement contradicted an earlier statement from the CBN that there were enough of the new notes with the banks.

CBN’S Director of Corporate Communication, CBN, Osita Nwanisobi also noted that adequate plans had been made to heighten the circulation of the new notes.

He stated that speculations that the banks did not have enough new notes for circulation were false.

Nwanisobi however urged the general public to continue to use the old notes as they remain legal tender, promising that the new notes would be adequately circulated.

He said: “There is what we call moral suasion; we had a meeting with the banks and we all agreed that we can begin to put the new notes in the ATMs so that people would see and boost circulation.

“Yes, you can say it is a directive. We keep reviewing and my worry is by next week when new notes are being paid across the counter people would say they are flaunting. “We had a meeting and we had moral suasion because people are complaining they are not seeing new notes. So, that also doesn’t mean that banks cannot pay over the counter.”

Raising pump price of petrol to N300, not too much for Nigerians – Sylva