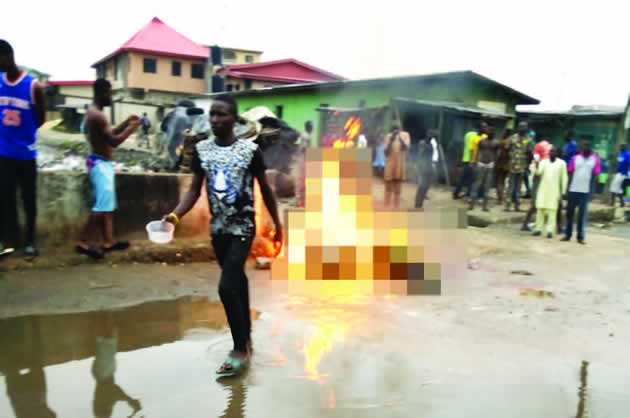 A man has been set ablaze for allegedly burgling a branch of the Redeemed Christian Church of God in the Somolu area of Lagos.

The suspect was one of three burglars that broke into the church on Olorunkemi Street, Bariga.

He was however the ost unfortunate as the others escaped when neighbours confronted them.

While two of the robbers escaped, the mob caught up with the third suspect and set him ablaze.

The Police Public Relations Officer, DSP Bala Elkana confirmed the incident. He said the suspect was still alive and recovering in a hospital.

He noted that the suspect had yet to give any information to the police.

“We got a distress call that a mob action was going on and we quickly rushed to the place. The suspect was rescued; he is still alive. He is not talking yet for us to get any information from him. The stolen items have been recovered by the police,’ said Elkana.

“We have started investigating the case and a manhunt has been launched for the fleeing members of the gang. The suspect will be charged to court to face the law as soon as he recovers.”

He advised that suspected criminals should be handed over to the police for investigation, adding that communities had the right to follow up on matters with the police.