Certain leaders of the Peoples Democratic Party (PDP) in Edo State, who include high chief Raymond Dokpesi, have commenced consultations reconciliation in Edo North. The Edo North PDP leaders embarked on the reconciliation meetings to resolve their differences and be united in supporting the PDP presidential candidate, Atiku Abubakar, in the 2023 elections.

National Daily gathered that the PDP leaders began their meeting from the residence of a member of the Atiku campaign organisation, Henry Tenebe, at Ikabigbo in Etsako West Local Government Area, Edo State, then, proceeded to the residence of Kasimu Ozeto in Ivbiaro, Owan East. 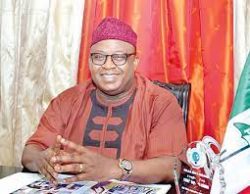 They later went to Okpella in Etsako East to meet with leaders of the four wards of Okpella, including Kayode Ajay, Barrister Abbas Jega and Segun Balogun.

The PDP leaders in Edo North were said to have agreed to unite and work for the victory of Atiku Abubakar, the PDP presidential candidate. They promised to utilise the electoral relevance of the various wards in Okpella.
Barrister Abbas Jega was cited to have noted that the presidential ticket is for PDP but the crisis in the party needs to be resolved.

Raymond Dokpesi had commended the PDP leaders for their steadfastness, decrying the neglect of Okpella over the years despite the economic viability of its communities.
Dokpesi emphasised that he is part of the Atiku project and needed the blessings of Okpella leaders for Atiku to succeed in the presidential election.
The Party leaders emphasised that need for synergy that will give victory to all PDP candidates in Edo State.