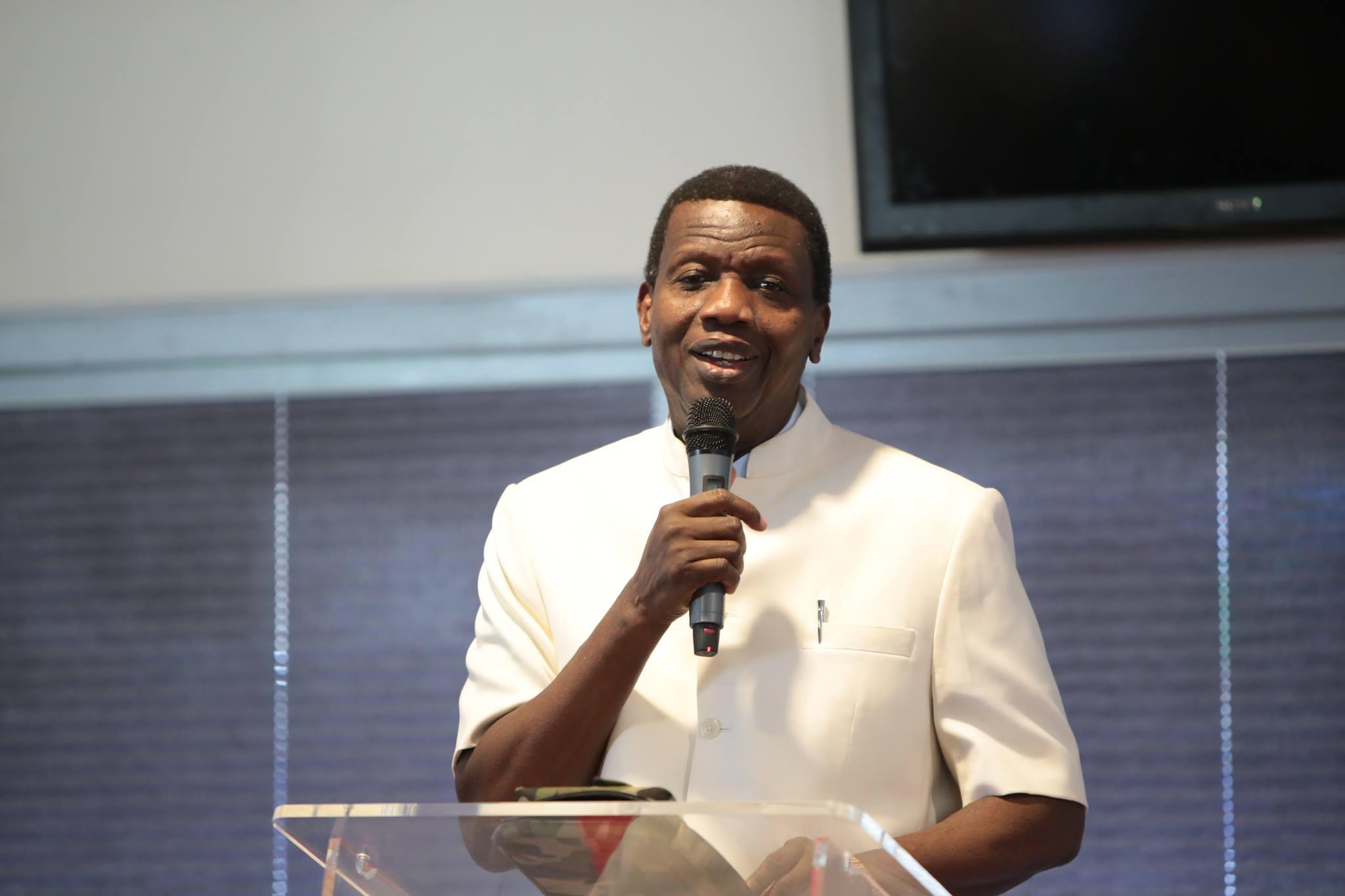 The General Overseer of the Redeemed Christian Church of God, Pastor Enoch Adeboye, created a scene at the Youth Centre of the Redemption Camp, Lagos-Ibadan Expressway when he kissed his wife, Folu Adeboye, on the stage during a book presentation in his honour.

Adeboye, who expressed surprise at the occasion, said he would have stopped the project if he knew about it, adding that he was undeserving of the honour.

Folu told the audience that she hid information about the book from her husband for one year, adding that she planned it to coincide with his 75th birthday.

While standing with Adeboye on the stage, together with their four children, she said her hubby was only informed about the event a day before.

The Master of Ceremonies teased Folu to tell the audience the pet names she gave her husband, demanding an expression of love since the occasion also marked 50 years of their marriage.

“Pastor ID, why are you fast? This is just presentation of a book, not marriage anniversary. Whatever you want, I will do it…,” she replied, as she hugged the husband and went on to kiss him as the audience erupted in excitement.

Adeboye, in his remark, expressed surprise at the book presentation, which was written by 40 people.

He said, “The event of today, without any doubt, has been a great surprise to me. This is because my wife hid it from me, and we don’t normally hide anything from each other, because we have been married for 50 years and we are still on honeymoon.

“Why the event is a surprise to me is that God also hid it for me. I had no inkling at all from my Daddy that something like this is happening. If God hid it from me, it must mean that He approved of it. My wife knows that if I had any idea about what is happening today, it will never happen. I would have stopped it long ago because who am I without Jesus Christ? If there is anyone to be celebrated, it should be Him.

“People say I am humble, but people need to know where I am coming from. I cannot say I have any ability or wisdom. Everything has been the Lord Himself. When I was about 40 and I saw grey hairs on my head, I wondered why and God said I was carrying a burden that was not mine.

“God said, ‘I am just using you as camouflage. People need to see someone. So, I am putting you forward so that I can do the work from behind.’ So, everything that is happening in RCCG, nothing is of Adeboye at all; it is all about God. So, for you to say you are writing a book about somebody that is nothing, someone who has almost zero beginning, from a poor family and passed through secondary school by God’s grace.  For God to allow today to happen without telling me, it can only be that He wants to draw your attention to Himself that if you allow Him, He will do great things, using you as camouflage.”

Adeboye said it was a miracle he was at the occasion as he had slept one hour a night during the seven-day convention of the church which ended on Sunday.

While appreciating people who wished he lived long, he said he would die when his assignment was over.

The cleric lauded his wife for always standing by him, saying she was the greatest gift he had aside from the Holy Spirit.

While recounting a year when they both fasted for 40 days three times over an issue, Adeboye said his wife refused to back out when he asked her to stop.

“If you can find a woman that can stand by you with 40 days of prayer and fasting, first, second, third time and willing to go with you as long as possible, then I will classify your wife as second to mine. Without my wife, I cannot be  doing what I am doing today,” he said.

The cleric later presented his four children to the gathering, describing them as God’s gifts to his family.

Earlier, former President Obasanjo had narrated how he consulted Adeboye before accepting to run for President in 1999.

He said after meeting Nelson Mandela and Desmond Tutu in South Africa, who encouraged him to go ahead, he sought counsel from Adeboye.

He said, “For doing nothing, I was sent to prison. I came out of prison, and some people came running after me to contest to be President of Nigeria. I wondered that the one I did before, what did I get out of it? Prison! And now, you want me to do another one, that will be double prison.

“And when you are at crossroads, you need the direction of God to know which way to follow. I prayed and fasted and wasn’t satisfied. I decided to go to South Africa to meet people I had high regard for: Nelson Mandela and Desmond Tutu. Mandela said I should follow my instinct. Tutu said I should not be tired of serving my people.

“I came back home to see pastor. And I told my story. We prayed and he said you can go, when God tells me what I should tell you, I will call for you. I was surprised that Mandela and Tutu gave me answers on the spot, but he said I should go. When will God tell him?

“A couple of weeks or thereabouts, I was sent for and he said God had said I should go ahead. If there was any doubt in my mind, all were gone.

“I picked my Bible to read while returning home and it was the Book of Esther that I opened. I saw where Esther was told that maybe it is because of this that God has brought you here.”

Obasanjo, who noted that politicians were supposed to influence the lives of the masses positively, said Pastor Adeboye had done more than politicians in this regard.

He said, “As politicians, we are supposed to touch lives, but, for Pastor Adeboye, he has touched more lives than politicians. He has been a man of God with a difference, whom I benefited from personally when I was consulting to contest the 1999 election.”

He added that it was the wife of the General Overseer that invited him, without the knowledge of the husband, asking that Adeboye should forgive them for this.

Obasanjo said, “I was told not to reveal my coming here by Mummy (Adeboye’s wife). How can I come to you without calling you? But, that was the instruction. Until I am in this hall, I never see anything about this programme. That means we have committed sins by keeping this secret from you and we seek for forgiveness from you and I am sure we have been forgiven.

“While I was in prison, Abacha had said three of us–myself, Shehu Yar’Adua, MKO Abiola, none of us will come out alive. Two of them did not come out of prison alive, but I came out. Not because I was clever, good and upright. It was all because of the grace of God. Sir, I thank you for helping me to make the right decision at that crucial time of my life. He, who does not respect this man, does not respect God.”

The Acting President, Osinbajo, who was Adeboye’s protocol officer, said he accepted to run as the Vice-President after the cleric asked him not to reject the nomination.

Osinbajo, who also defended Adeboye’s use of private jet because the RCCG was in more than 180 countries of the world, second to Coca-Cola with branches in 200 countries, cited three different instances when the pastor influenced his life positively.

He said his passport had been stolen in South Africa for about three months when Adeboye prayed for him and the thief returned it when he had lost all hope.

The Acting President said about a month later, his second daughter, who was ill and at the point of death was healed after a prayer by the cleric.

“Of course, many know that I am not a politician and I was not a politician when I was nominated to be the vice-president. What I told those who approached me was that I would speak with two people-my wife and daddy (Adeboye). People around me said he would say no. I was also quite certain that he would say ‘Don’t bother or let us just think about it’. But I was surprised when he told me that if I was nominated, I must accept it. He was categorical about it,” he added.