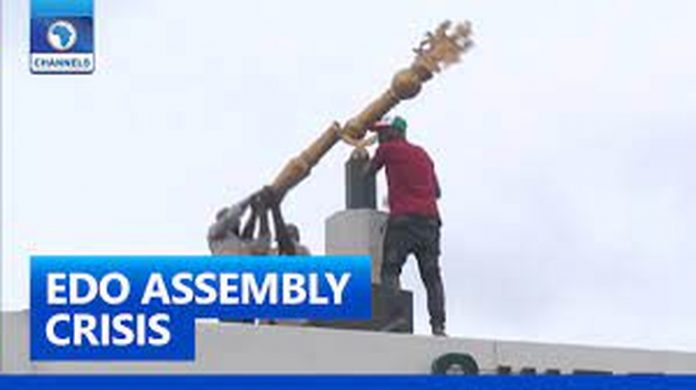 After the siege on the Edo Assembly complex was lifted Thursday, the next action in the on-going drama between the APC and the PDP in Edo rose through the roof.

According to a video shared by Channels Television, some men were seen on top of the complex, unhinging the icon of legislative house—mace—as they took off the roofing.

And down on the ground, trucks were seen dumping gravels at the gate of the building.

Just some distance from the dump stood Gov. Godwin Obaseki watching as more men entered the premises earlier bombarded by police whom the PDP said were deployed by the APC federal might.

No fewer than 14 APC lawmakers-elect  loyal to former national chairman Adams Oshiomhole had planned to meet in the Assembly complex which has been under renovation for months as legislative activity take place in the government house.

The police siege earlier in the day could have headed off the meeting allegedly meant to impeach Obaseki following the impeachment of House Deputy Speaker Yekini Idiaye for supporting the APC candidate Osagie Ize-Iyamu.

Edo Speaker Frank Okiye had alleged that the impeached lawmaker was planning with Imo Gov Hope Uzodinma to cause chaos in the Edo assembly.

And Okiye called on President Muhammadu Buhari to call the APC to order or else the state will end up in chaos.