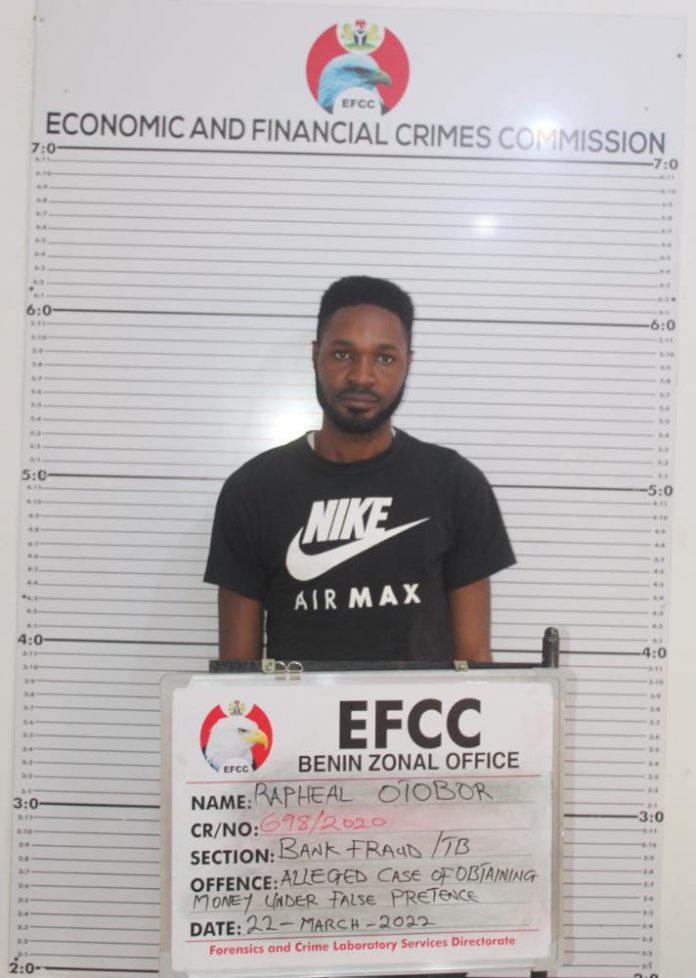 The Benin Zonal Command of the EFCC today, May 23, 2022 arraigned one Raphael Otobo on a three count charge of intent to defraud before Justice (Professor) C. A. Obiozor of the Federal High Court sitting in Benin City, Edo State.

Otobo is alleged to have defrauded one Kenneth Asuma Osaghe of the aggregate sum of One Million Naira under the false pretense of helping him secure a Canadian visa.

One of the counts reads : “that you, Raphael Otobo sometime in July 2018 at Benin, Edo State within the jurisdiction of the Federal High Court with intent to defraud, did induced one Kenneth Asuma Osaghe to pay the sum of N420,000 into account number 2064628954 domiciled at UBA under the false pretense that the money was for Canadian Visa, a representation you knew to be false and thereby committed an offence contrary to section 1(1)(b) of the Advance Fee Fraud and Other Fraud Related Offences Act,2006 and punishable under Section 1(3) of the same Act”

The defendant pleaded not guilty to the three count charge preferred against him.

In view of his plea, the prosecution counsel, I.K. Agwai asked the court for a trial date and to also remand the defendant at a Correctional Facility. However, counsel to the defendant, Emmanuel Izegaegbe prayed the court to grant the defendant bail, stating that the alleged offences were bail-able.

Justice Obiozor granted the defendant bail in the sum of One Million Naira with one surety in like sum. The surety shall be resident in Benin and own a landed property within the jurisdiction of the court.

The court also ordered that both the defendant and the surety shall submit two passport photographs to the court.