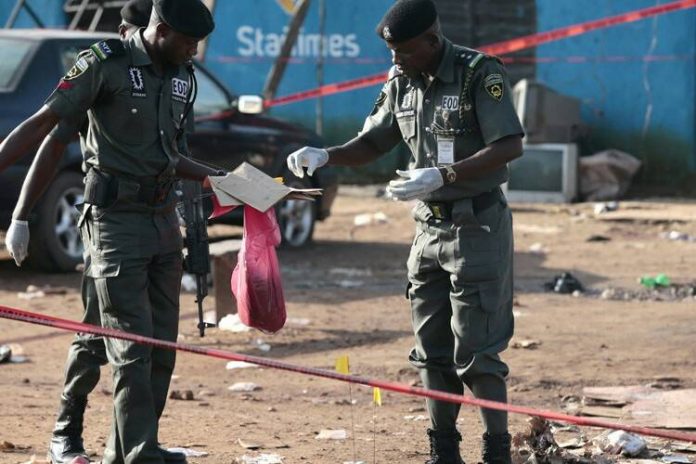 After initially attributing the explosion that occurred in the Sabon Gari area of Fagge Local Government Area of Kano State last Tuesday to a leaked cylinder, the State Police Command has now made a U-turn by confirming that the explosion was actually caused by some materials used in making Improvised Explosive Device (IED).

The Command in a statement on Monday, also said two suspects have been arrested in connection with the explosion which claimed over nine lives, many injuries and destruction of properties.

The change of heart by the police followed the outcome of investigation by the Explosive Ordnance Disposal-Chemical, Biological, Radiological and Nuclear Defense, EOD-CBRN, and Operation Puff Ader which revealed that the explosion was not caused by a gas cylinder as initially thought.

In the statement issued by the state police spokesman, ASP Haruna Kiyawa, the Command also released names of the victims who died in the explosion as Ejike Vincent (welder), Michael Adejo (chemical seller), Musa Kalla (tea seller), Christiana Abosede and one Mary.

“Preliminary investigation revealed that among the nine victims of the explosion, one of them dealt in illicit storage of toxic chemicals and other hazardous materials.

“He was later identified as Michael Adejo (now late). Items recovered at the scene include five bottles of different brands of Acidic Liquid, three bags of Potassium substance, one Jerican of mixed chemicals, six and a half cartons of Snuff (Tobacco) and five drums of Polymer (Chemical).

“Technical Investigation conducted by the command’s Explosive Ordnance Disposal – Chemical, Biological, Radiological and Nuclear Defence, EOD-CBRN, revealed that the explosion is suspected to have occurred as a result of mixed Chemical/Gas reactions exposed to a source of heat, such as fire, spark or increase in pressure resulting in combustion/shock waves, creating an explosion which can have shattering effects.

“Meanwhile arrests have been made linking one of the collapsed shops with dealings in sales of illicit, toxic chemical substances and combustible materials suspected to be used for making Improvised Explosive Devices, IEDs. Evidence of purchase was also recovered. An investigation is in progress” the Police statement stated.