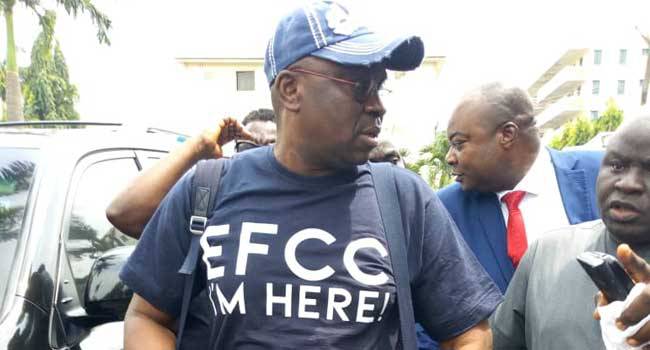 Former Governor of Ekiti State, Ayodele Peter Fayose, storms the Headquarters of the the Economic and Financial Crimes Commission (EFCC), Abuja in a customized t-shirt and a face cap with inscription “EFCC I’m here.”

National Daily gathered that Fayose, appearing in a black customized T-Shirt with the inscription: “EFCC I’m Here” on top of a pair of jeans and a face cap, arrived the Wuse 2 office of the EFCC, was accompanied by the Governor of Rivers State, Nyesom Wike, a former Minister of Aviation, Femi Fani-Kayode and his Lawyer, Mike Ozekhome (SAN).

Fayose had on Monday declared that he would come to the EFCC office with his bed and pillows; warning that he cannot be intimidated by the EFCC. The former Ekiti State Governor had maintained that he has nothing to fear about the EFCC, insisting that he has facts of every accusation the EFCC would want to raise against him.

Speaking to journalists at the EFCC office, Fayose remarked that the EFCC deployed its personnel to mount surveillance at his residence, even after he had volunteered to report to the Commission after he quits office.

Counsel to Fayose, Mike Ozekhome (SAN), had appealed to EFCC to avoid abusing the governor’s right.

Share this on WhatsApp
Related Topics:Ayodele FayoseEconomic and Financial Crimes Commission (EFCC)
Up Next