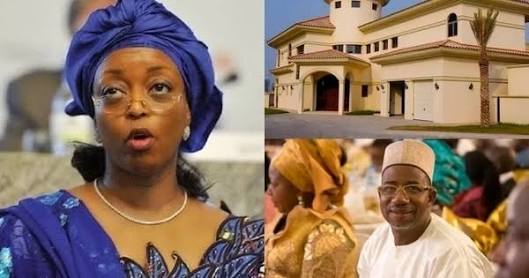 According to a source who craved for anonymity, some of these assets are in Emirates Hills, Marina, Jumeira, Bur Dubai in Dubai and Abu Dhabi in the UAE. “We are yet to focus on looted funds stashed in the Emirates,” the source said.

Others whose properties have also been identified included a former Minister of the Federal Capital Territory, Sen. Bala Mohammed and his son, Shamsudeen.

Although the ex-FCT Minister and his son are on the Federal Government’s list, their Dubai houses are yet to be listed. The investigation is on.

On the inclusion of the ex-FCT minister and his son, the source added: “This is based on intelligence report. We will keep you posted on the outcome of their suspected assets in Dubai. Ours is to make their names available for investigation by the UAE.

This is coming barely two weeks after the federal government initiated moves to seize assets of Diezani and four others after it signed six agreements with the United Arab (UAE).

Following a state visit to the UAE by President Muhammadu Buhari on January 19, 2016, the Federal Government entered into six agreements with the Emirates.

Section 7 says: “The commission has power to (a) cause any investigations to be conducted as to whether any person, corporate body or organization has committed any offence under this Act or other law relating to economic and financial crimes.

“(b) Cause investigations to be conducted into the properties of any person if it appears to the commission that the person’s lifestyle and extent of the properties are not justified by his source of income.”

Sections 28 and 34 of the EFCC (Establishment Act) 2004 and Section 13(1) of the Federal High Court Act, 2004 empower the anti-graft agency to invoke Interim Assets Forfeiture Clause.

Nigeria Vs Cameroon: Why Super Eagles picked up 4 points