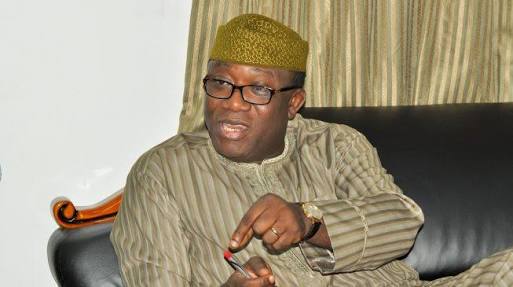 Share this on WhatsApp
Spread the love
The crisis rocking the All Progressives Congress (APC) in Ekiti state has continued to fester barely weeks to the governorship election slated for July 14.
While leaders of the party have tried to reconcile the two gladiators, Segun Oni and Kayode Fayemi, the party’s flag bearer in the forthcoming governorship election, supporters of Oni have continued to cry out over alleged marginalization by the Fayemi’s group.
Segun Oni’s campaign organisation says its members have been ostracised since their principal lost to Kayode Fayemi in the All Progressives Congress (APC) governorship primary in Ekiti.
In a communiqué released after a meeting in Ado-Ekiti on Friday and available to National Daily, the group said the party flagbearer’s camp has demonstrated “open hatred for Segun Oni and his group”.
“The insinuation for all these started before the primary when it was reported that the main reason while Dr. Fayemi joined the race was to prevent a “stranger” like Segun Oni from taking over the APC.
Their gospel belief is that Chief Segun Oni, the former Deputy National Chairman (South) for APC is a PDP member who is a stranger to the APC,” the communiqué signed by Ife Arowosoge, director of the organisation, read.
The group said all efforts by Oni and his camp to make Fayemi’s campaign organisation treat them as a united political family has proved abortive.
“Rather than seeing and treating Segun Oni and his group as partners in the quest for a resounding victory for our great party, APC in the July 14 governorship election in Ekiti, the JKFCO has been nursing the fleeting illusion that they could do it without the Segun Oni and his group who shall therefore be put in the cooler for the four-year tenure of Fayemi.”
The group said it has it on good authority that all the incoming elective positions have been allocated to Fayemi’s cronies and the new joiners without recourse to Oni and his supporters.
Meanwhile, Bola Tinubu and Bisi Akande, chieftains of the party have expressed support for Fayemi ahead of the election, calling on Oni to dissociate himself from the alleged suit asking court to revoke the candidacy of Fayemi.
Both APC chieftains, alongside Segun Osoba, Niyi Adebayo and Pius Akinyelure, have now reaffirmed their backing of Fayemi in an advertorial on Friday.
They said Fayemi has fulfilled all necessary requirements for the election.
“For the avoidance of doubt, we the undersigned leaders remain solidly behind the candidacy of Kayode Fayemi,” the advertorial published on Nigerian Tribune read.
“We have stood behind Kayode Fayemi’s candidacy since he won the governorship primaries and when we all gathered in Ekiti for the Mega Rally on June 19, it was an emphatic declaration of support for his candidacy.”
The chieftains said they had a meeting with the aspirants who lost the primary election, and suggested that Fayemi run an effective and inclusive campaign that will ultimately lead to an all-inclusive government.
They also demanded the immediate withdrawal of the purported court action. 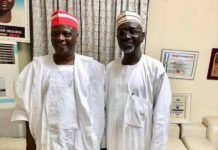 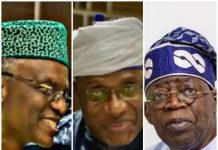