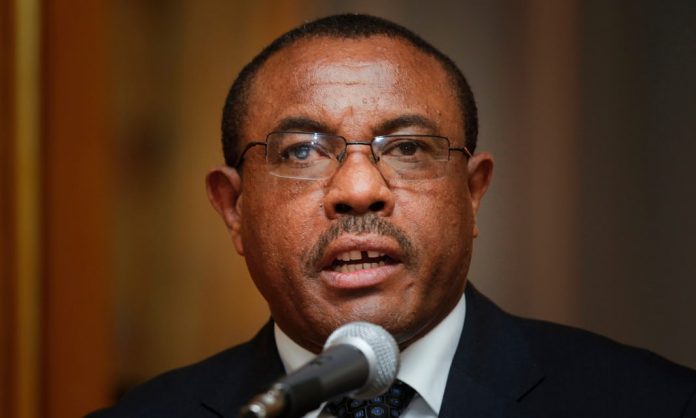 The Prime Minister of Ethiopia, Hailemariam Desalegn, has resigned from office following torrents of mass protests against his leadership by the people of Ethiopia.
The Ethiopia’s prime minister submitted a letter of resignation in a surprise move that comes amid protracted anti-government protests.
The resignation of Hailemariam Desalegn, who has been in power since 2012, was first reported by the state-affiliated broadcaster Fanaon Thursday and follows a nationwide state of emergency last year. His stepping down is unprecedented in the east African country.
Hundreds of people have died in violence sparked initially by an urban development plan for the capital, Addis Ababa. The unrest spread in 2015 and 2016 as demonstrations against political restrictions and human rights abuses broke out.
“Unrest and a political crisis have led to the loss of lives and displacement of many,” Hailemariam said in a televised address to the nation. “I see my resignation as vital in the bid to carry out reforms that would lead to sustainable peace and democracy.”
The letter was accepted by the executive committee of Hailemariam’s party, the Southern Ethiopian People’s Democratic Movement, as well as the wider ruling coalition, the Ethiopian People’s Revolutionary Democratic Front (EPRDF), state-backed media said.
The Ethiopian embassy in London issued a statement saying Hailemariam’s resignation had been accepted, but he would “continue to serve in his current capacity” until a replacement is appointed at the next EPRDF congress.
In a short statement, Hailemariam said he was not quitting politics, but wanted to continue his work to reform Ethiopia. “My decision is to be part of the ongoing reform programmes,”
he said, according to Fana, which added: “The prime minister said he tried his utmost effort to solve the crisis in his country and he is resigning now to be part of a solution to it.”
Hailemariam, previously a low-profile politician and technocrat, succeeded the former Marxist rebel Meles Zenawi, under whom he had served as deputy prime minister and foreign minister.
In 2015, months of anti-government demonstrations spread across Ethiopia, prompting parliament to declare a 10-month nationwide state of emergency in October 2016. This quelled the worst of the violence, but periodic uprisings still occur.
This week, disenchanted young men blocked roads and businesses stayed closed in and around Addis Ababa.
In an attempt to ease tensions, the government last month began issuing a string of pardons and releasing prisoners after Hailemariam said jailed “politicians” would be freed “to improve the national consensus and widen the democratic platform”.
Ethiopia’s government has long been accused of arresting journalists and opposition leaders. Rights organizations and opposition groups have called for those held to be released, saying they were arrested on trumped-up charges and punished for their points of view.
Hailemariam said he would stay on as prime minister in a caretaker capacity until the EPRDF and the country’s parliament accepted his resignation and named a new premier.