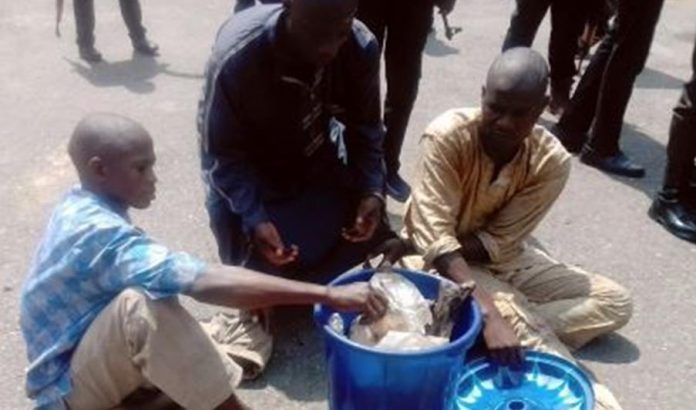 A night guard, Adewumi Gbadamosi, has narrated how he killed a boy, later identified as Kehinde, and distributed the boy’s body parts to ritualists in Osun state.

The evil night guard who was paraded at the Osun State Police Command headquarters in Osogbo claimed he shot the boy after scaling the fence of a building he watches around 2am.

He added that the boy refused to answer his question satisfactorily, hence, he decided to shoot him.

“After shooting him, I became scared, so, I decided to sever his body and threw some of it inside Okpokpo stream on Osogbo, while I gave the head to a man, whom I know through a friend because he said he needed a globe, (human eyes).

READ ALSO: Buhari opens up on killer herdsmen, tells Governors what to do

“I also gave a piece of flesh to another friend of mine, who is a vehicle electrician. I don’t have any need for the rest of the body, I just kept it in my office, at Kajola, where I attend to those seeking spiritual help.

“No one knew that I shot or killed the boy, I severed the body to evade arrest. I still have in my custody, the two hands and legs of the deceased”, he said.

Meanwhile, the vehicle electrician, Akeem Saka confessed to have taken dried flesh from the herbalist, but he had no intention of using it.

“I went to him (herbalist) for consultation over my business, but he charged me N1200 and he gave me human flesh, I took it from him to avoid being killed if I refuse, hence, I took it and kept it in a white bowl at my workshop.

“I did not follow the herbalist to the pastor to deliver the human head to him, I was not involved in the killing of the boy. I only went to him for assistance but he gave me human flesh to keep”, he said.

Addressing journalists, the Commissioner of Police, Olawale Olokode disclosed that the suspects have confessed to the crime and assured the public that they will be prosecuted after necessary investigation is concluded.