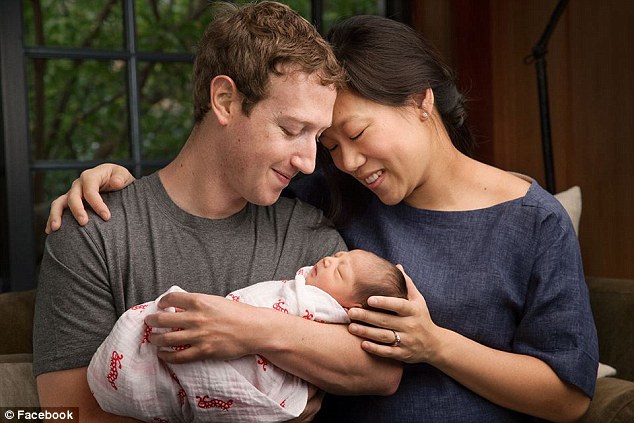 By Mercy ben-kalio
Billionaire founder of Facebook, mark zuckerberg as well as his wife Priscilla Chan have announced the birth of their second daughter, August.
On Releasing a family photograph on the social media site to inform the world of the addition to their family, the couple also published a letter to the child, who was born this month.
Mr Zuckerberg said he would be taking two months of paternity leave in two separate following August’s birth in two parts.
He wrote:
The CEO intends to take a month off immediately to spend time with “Priscilla and the girls” and then “spend the whole month of December together as well”,.

At the time of the birth of their first daughter, Max, Mr Zuckerberg and Ms Chan announced plans to give away 99% of his $45bn fortune – which if carried through would leave the family with an austere $450m.

The pair said they wanted Max “to grow up in a world better than ours today”.

In the letter to August

, they urged her not spend her childhood “worrying too much about the future”.

“When your sister was born, we wrote a letter about the world we hoped she and now you will grow up in — a world with better education, fewer diseases, stronger communities, and greater equality,” the parents said.

“But rather than write about growing up, we want to talk about childhood. The world can be a serious place. That’s why it’s important to make time to go outside and play.”

“Childhood is magical. You only get to be a child once, so don’t spend it worrying too much about the future,” the pair wrote for August.

“You’ve got us for that, and we’ll do everything we possibly can to make sure the world is a better place for you and all children in your generation.”