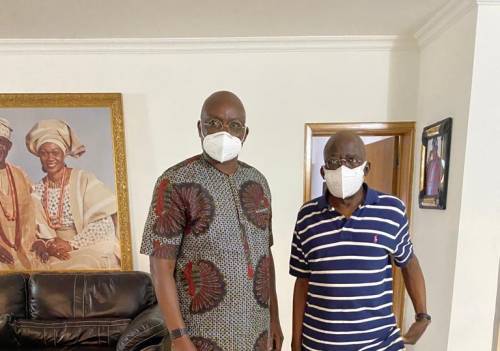 Reporting himself in a tweet, Fayose said health issues have no political boundary, and he is not like others that are more interested in signing condolence registers.

“Today, I was at Bourdillon, Ikoyi, Lagos to wish Asiwaju Ahmed Bola Tinubu a quick recovery. Health issues know no political party and in this part of the world, we seldom celebrate people when they are alive. Rather, we like to sign condolence registers. To me, that is not the best way to live,” he tweeted.

Fayose has never hidden his respect for Tinubu as a Yoruba leader. Te former governor has said it over and again.

“Most importantly, politics should be about love for each other. Therefore, like other leaders in Nigeria, I wish Asiwaju sound and robust health.”

To political analysts, this kind gesture means a lot.

Fayose is facing a N6.9 billion financial fraud trial thanks to the EFCC.  And the APC is reputed for writing of defectors’ trial and debts when they cross over.

But Fayose thought faster, and lashed out to such analysts.

“And to those negative political analysts, this visit notwithstanding, I remain an unrepentant PDP leader and key stakeholder,” he added,” he said.