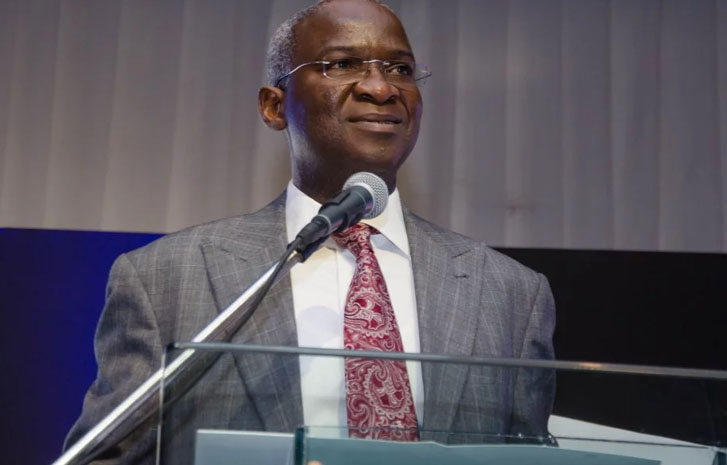 The Federal Government has intervened in 83 internal road networks in Tertiary Federal Institutions across the country.

Minister of Works and Housing, Babatunde Fashola made this known on Friday in Uyo during the inauguration and handing over of 1.2 km internal road constructed by the federal government to the University of Uyo

Fashola, who was represented by Mr Kayode Akinwande, Federal Controller of Works, in Akwa Ibom said that some of the internal roads have been completed and handed over, while some projects were ongoing.

He said that the infrastructure needs of tertiary institutions were steadily being bridged by a gradual process of repairs, renewal and construction on major highways and it has now reached the schools.

“We have successfully intervened in 64 internal road projects in various Federal Tertiary Institutions and handed over a total of 46 as at March.

“We now have another 18 ready to be handed over, while we currently attending to 19 roads in similar institutions across the country making a total of 83.

“It is undebatable that quality of education will be impacted by the quality of infrastructure and learning environment and those who doubt it should simply listen to some of the feedback from students in the schools where this type of intervention has taken place.

“The students are expressing renewed enthusiasm with regards to attending classes, because some defective roads, have been restored to good condition.

“This is consistent with our progressive ideal of improving the human condition; and that process continues here today as we hand over this one in University of Uyo as a critical intervention to suport education,” Fashola said.

Fashola said that during the construction of the road, 200 people were employed in the process contributing to the job creation initiative of the federal government and appealed to the school to make good use of the facilty.

Ndaeyo said the road network handed over to the school was before now in a very poor condition and was a death trap, to both staff and students, members of the club and worshippers at the Catholic Cathedral.

“It is on record that the poor condition of these roads had posed a serious impediment, if not a death trap, to both staff and students, members of the club and worshippers at the Catholic Cathedral.

“Also the Faculty of Business Administration/University International School road to say the least, was an eyesore.

“Therefore, the gesture of the Federal Government, under the Leadership of our dear President Muhammadu Buhari, to approve and timely execute the fixing of the roads, which are billed for commissioning today, is highly commendable,” Ndaeyo said.

The vice chancellor added that the University of Uyo was grateful to the federal government for other ongoing projects to address the challenges facing the institution.

He appealed to government, multinational organisations and well-meaning individuals that many more roads were still very deplorable and of serious concern to management and university community.

The News Agency of Nigeria reports that highpoint of the event was the inauguration and handing over of the roads to university management.

Share this on WhatsApp
Related Topics:83FasholaFGintervenedroadstertiary institutions
Up Next