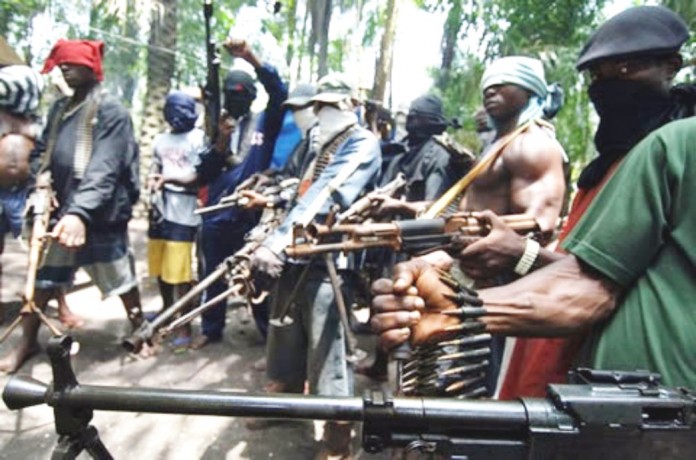 MILITANTS in the Niger Delta have intensified their attacks on oil facilities in the country thereby sabotaging the efforts of the Federal Government at increasing the production of locally refined petroleum, National Daily investigation has revealed.

The latest attack in the series was on the Nigerian National Petroleum Corporation crude trunlline feeding crude oil to both Warri and Kaduna refineries last week. The attack on the NNPC facility, which was recently repaired, is the second in as many days carried out by a new group of suspected militants in the Niger Delta that has vowed to cripple the oil and gas industry and the backbone of the Nigerian economy.

Worst hit by the latest attack is the Chevron Well D25 in Abiteye, a major gas Well belonging to Chevron which serves the Abiteye, Alero, Dibi, Otunana and Makaraba flow stations that feed the Chevron tank farm in Escravos.

In a statement released recently, a new militia group, the Niger Delta Avengers (NDA) claimed responsibility for the series of attacks. The group’s spokesperson, Mudoch Agbinibo, in the statement alleged that latest attack was in line with a three-day ultimatum to Tompolo “to apologise” to the group for allegedly insulting the group.

Agbinibo said that the attack was merely in fulfillment of NDA’s threat to launch an attack on an oil installation within Tompolo’s enclave in Ijaw Gbaramatu Kingdom.

According to the statement, “This is a clear warning to the all Niger Delta politicians, traditional rulers, community leaders, and the likes of Tompolo to mind their business and leave the liberation of the Niger Delta people to the Avengers; those who believe taking sides with (the) federal government to fight Niger Deltans is the best option.

“We are using this medium to ask all Niger Deltans to take the war to all oil installations in their various communities because this is your war.”

The Group in the statement also threatens to cripple the economy unless their demand is met by the Federal Government, warning all international oil companies operating in the Niger Delta to brace up for more attack.

This latest attack is another setback to the nation’s oil and gas production sector, even as the Shell Petroleum Development Company (SPDC) is still working to restore the Forcados export terminals after a similar attack two months ago.

The development may further reduce the nation’s oil and gas output. But Chevron is yet to confirm if production has been halted at Escravos and how much of the process is affected.
The group had earlier claimed responsibility for the attack on the Forcados 48-inch Export Pipeline two months ago.