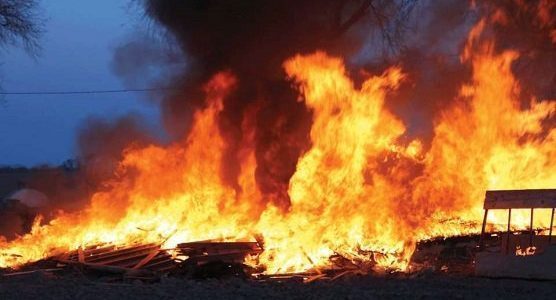 A fire outbreak on Sunday night destroyed shops and goods, worth million of Naira, at the popular Atakumosa Market, Ilesa, Osun State.

The combined team of the Osun and Federal Fire Services were able to control the fire from spreading, while policemen provided security and prevented looting at the market.

The Osun Fire Service Spokesperson, Mr Ibrahim Adekunle, said that the fire started at about 2.15 a.m and that only 12 shops were affected by the inferno.

“At exactly 2.15 a.m, we were notified of a fire outbreak at shops attached to the post office within Atakunmosa market, Ereja Square, Ilesa.

“We sprang into action and put out the fire to prevent it from spreading to nearby areas.

“Within 30 minutes of our arrival, we were able to put the fire under control.

“A roll of shops, comprising 12 units, were, however, severely damaged by the fire,” Adekunle said.

He said no human casualties were recorded during the incident and that the fire is suspected to have started due to electrical surge.

He, however, said that investigation would be carried out to ascertain the cause of the fire outbreak.

According to the News Agency of Nigeria, an overnight fire outbreak equally destroyed this same Atakumosa Market in Feb. 2020, with goods worth millions of Naira destroyed and the market was closed for months by the state government.