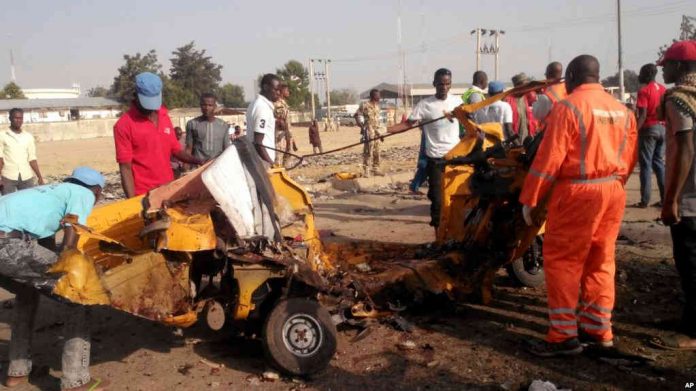 It was a bloody Saturday at the outskirt of Maiduguri, Borno State as four female suicide bombers suspected to be Boko Haram adherents hit the state killing two suicide bombers and a teenager.

Confirming the attack, the Borno State Police Public Relations Officer (PPRO), DSP Isuku Victor, said that in the wee hours of today, two female suicide bombers detonated their IED vest in the outskirt of Alakaramtii village in Jere LGA, killing themselves in the process.

Saturday’s attack is coming after series of suicide bomb attacks in the state particularly the one in  a mosque at Muna Garage IDP community which claimed the lives of  20 people with 29 others injured.

Two other teenage female suicide bombers infiltrated Alakaramtii village. One of them hurriedly detonated her IED vest killing herself, her partner and an innocent boy.

“Four others including the mother of the innocent boy, sustained injuries.

“The corpses and the injured have been evacuated to University of Maiduguri teaching hospital.

“The police EOD team promptly rendered safe the unexploded IED vests and sanitised the area. Normalcy has since been restored to the area.