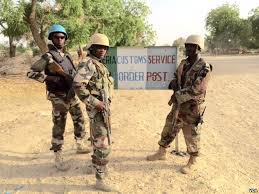 The Senate on Thursday may have directed President Muhammadu Buhari to approve the setting up of a military base in Auno, Borno State, after the attack on the community on Sunday where several travelers were killed by terrorists.

The Senate at plenary on Thursday condemned in strong terms the violent attack   by the terrorists.

After observing a minute silence in honour of the deceased and victims of the attacks, members of the Senate made a resolution to “urge the military authorities to establish a base in Auno to intensify their efforts in the fight against insurgency in the North East and instruct the Defence Headquarters to set up a panel to investigate what transpired at Auno and find measures to forestall future occurrence”.

The federal legislature further resolved to get the Federal Government arrange for the rehabilitation of the affected communities through the North East Development Commission (NEDC).

The Senate in other resolutions on Thursday, mandated the Federal Government through NEMA and Ministry of Humanitarian Affairs to send relief materials to the families of victims of the attacks.

The legislators further told the military and all relevant agencies fighting the Boko Haram terrorists to re-engineer and or rejig their approach towards exterminating insurgency in the North East, including other parts of Nigeria.

Share this on WhatsApp
Related Topics:Boko Haram sectsBorno State
Up Next