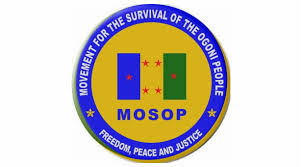 The Movement for the Survival of the Ogoni People (MOSOP) has been engulfed in fresh crisis over the leadership of the Movement. The renewed crisis, National Daily learnt, led to the suspension of MOSOP President, Legborsi Saro Pyagbara from office while he may still retain his membership of the group.

National Daily gathered that Fegalo Nsuke, MOSOP Publicity Secretary, in a statement declared the suspension of the president. The announcement of the suspension was said to emerge from a suspension notice signed by members of the MOSOP Steering Committee, leaders of the six kingdoms and two special areas, including the Deputy President, Fortune Okwa Chuor, and the National Publicity Secretary, Fegalo Nsuke. The aggrieved members had cited unsatisfactory performance, gross abuse of office, financial misappropriation, lack of accountability and unacceptable personal conduct as reasons for the suspension of the president. The duration of the suspension was, however, not indicated.

Share this on WhatsApp
Related Topics:Movement for the Survival of the Ogoni People (MOSOP)
Up Next