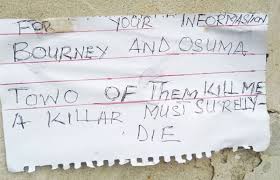 As two of his clients made lucky hits, a lottery operator known as Baba Pool at Kayode Market, Abule Ijesa, Lagos, decided to take his own life, and somehow take the lucky winners along—at least to the extent they will regret their winning.

It is all complicated.

Baba Pool, 70, stuck three suicide notes around the market and his office before he hanged himself right inside the shop.

But in the note, he claimed the two gamblers, Bourney and Osuma, one of them an 85-year-old,  killed him.

“For your information, Bourney and Osuma. Two of them kill me. A killer must surely die.”

The Lagos police command have moved in.

But before the officer from the Sabo Police Station came, the market people had been able to piece together a theory.

According to the Iyaloja of the market, Aderemi Thomas, Bourney and Osuma played lottery in Baba Pool’s shop. They won—probably big. But after winning, they could not get their money.

“The police came to interrogate us and we took them to the scene.”

“We received a report about a 70-year-old who committed suicide in the market. The man accused one 85-year-old man and another man.  He left a note that those two people were responsible for his death; we want to look at the extent of their culpability,” said Elkana.

“We have commenced investigation on the role they might have played and on why he accused them.”