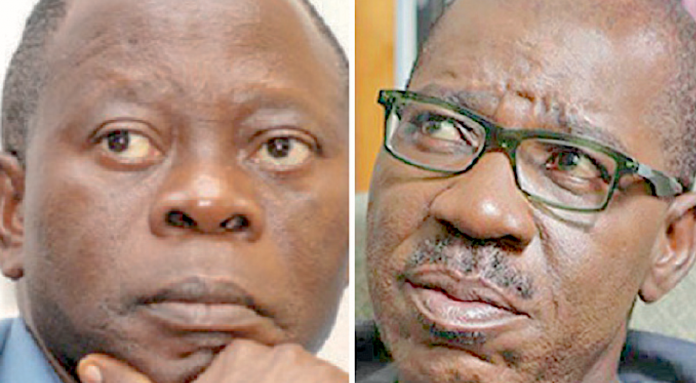 Leaders of the PDP provided documents, which disqualified Governor Godwin Obaseki from the APC governorship contest.

The APC and one of its members have hired no fewer than 11 lawyers to challenge Obaseki’s qualification after INEC releases the final list of candidate last week. No substitution is possible henceforth.

The 2016 suit the PDP filed to contest the document failed because it came late.

So the APC screening committee relied on the documents to disqualify Obaseki from the party’s primary in 2020.

But the same PDP endorsed Obaseki and gifted him the party’s ticket.

“Now, you remember one governor that said there are tax collectors, when something moved, they collected the taxes and the certificates became okay,” said Oshiomhole, referring to Rivers Gov. Nyesom Wike.

Oshiomhole revealed this while addressing his supporters that came to his GRA home in Benin on Thursday.

’So, I need to assure you that the decision of the screening committee members to disqualify the sitting governor (of Edo State) was based on the evidence provided by PDP leaders in 2016, which they found to be correct and you do not repeat the same mistake twice,” he said, reminding his listeners the Bayelsa experience that cost the APC its victory.

He expressed confidence in the APC candidate Osagie Ize-Iyamu victory.

“If I failed Godwin Obaseki’s examination, by the grace of God on Pastor Osagie Ize-Iyamu, I will score A1,” he said.

‘’It is not unusual to misread people but it will be unusual after misreading them, you continue on that dangerous part.”

Oshiomhole and his successorObaseki fought a months-long battle thatclimaxed in the suspension of Oshiomhole and exit of Obaseki from the ruling APC.