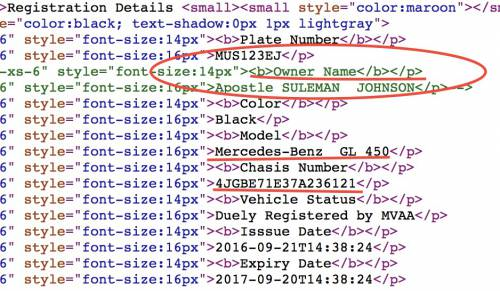 Share this on WhatsApp
Spread the love
If information stumbled on by a hacker is anything to go by, Omega Fire Ministry’s Apostle Johnson Suleman may have also been in a relationship with a second-rate Nollywood actress Daniella Okeke, and it has been discovered the founder bought her a $76,000 brand-new Mercedes-Benz 450 GL in 2016.
Stephanie Otobo, the bitter ex of the pastor, earlier fingered Okeke as one of the bevy of ladies Suleman may be having extra-marital affairs with.
The actress flaunted the posh ride on her Instagram page in front of a new house in 2016.
A hacker on weekend weaselled into a bugged Lagos vehicle registration website to dig up the particulars of that vehicle registered as Apostle Suleman Johnson’s Lawyers from the Festus Keyamo Chamber holding Otobo’s brief– in which she is asking for N500 million for a forced abortion he underwent for the apostle—has warned the founder of more reveals coming as more victims of his abuse out.
Otobo had insisted that Apostle Suleman impregnated her after they had sex  in Italy, New York and Nigeria.  The pastor denied the allegations and threatened to sue Keyamo for slander.
Share this on WhatsApp