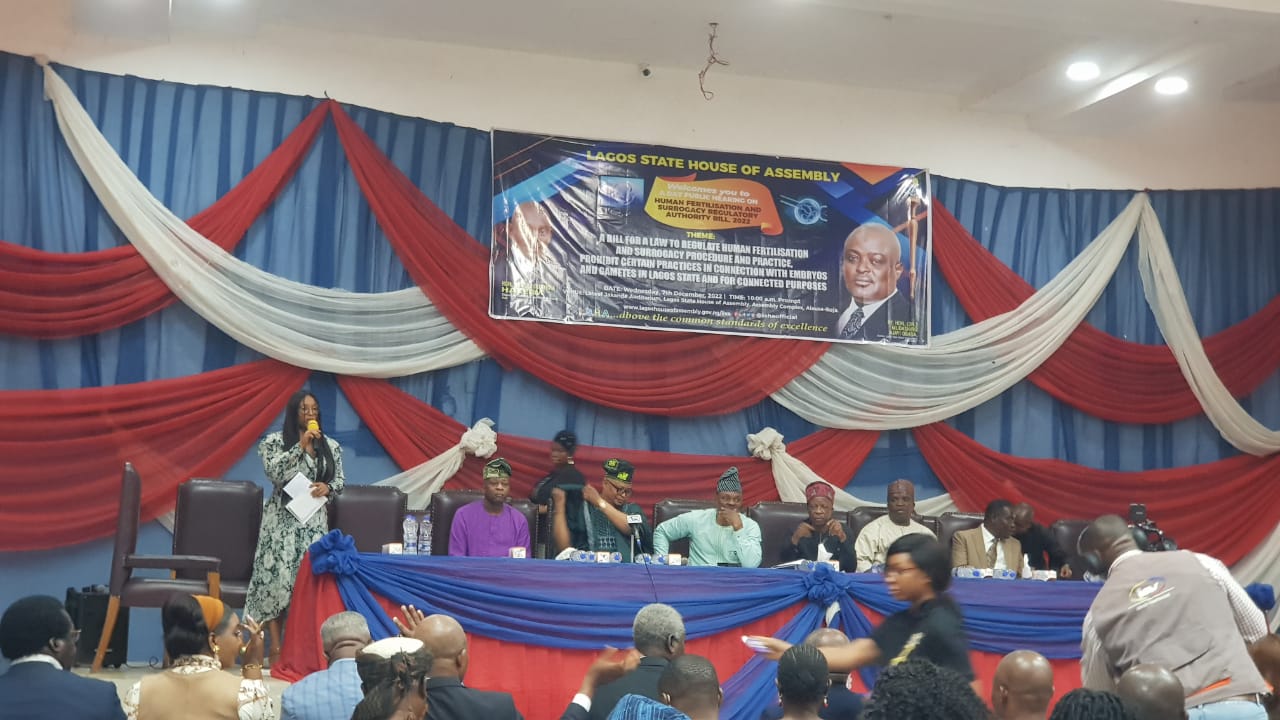 Stakeholders in the health sector has called for a redraft of the proposed bill in Lagos State House of Assembly on the Human Fertilisation and Surrogacy Regulatory Bill being considered by the lawmakers, so has to succinctly capture Assisted Reproductive Technology in the legal framework intended.

The stakeholders expressed their views on Wednesday at a public hearing held in the Assembly on a bill to regulate human fertilization and surrogacy procedure and practice, the stakeholders said that there is a need for the inclusion of the Association of Fertility Reproductive Health opinions in the drafting of the bill.

In his contribution, Emeritus Prof. Osato Ona Frank Giwa-Osagie, founder of OMNI Medical Clinic and expert in In-Vitro Fertilisation (IVF), urged the House to ensure that a comprehensive legislation about Assisted Reproductive Technology to make for effective enforcement.

He applauded Lagos for being a leading state in the health sector in Nigeria.

He also implored the House to incorporate the regulations of Health Facilities Monitoring and Accreditation Agency (HEFAMAA) into the bill.

Congratulating the House Committee on Health Services for the effort, he appealed to the House to incorporate professionals, especially where technicalities arise in the consideration of the bill.

In his contribution, Professor Oladapo Ashiru Secretary-General of the International Federation of Fertility Societies (IFFS) and President of the Academy of Medicine Specialities of Nigeria, also urged the House to bridge the laws from HEFAMAA to create an enabling surrogacy law.

He said the process of providing In vitro fertilization (IVF) services in Lagos State started in 1979/1980. “We went all over the world and did many types of research and we have perfected the process.

Ashiru stated that the bill cannot stand the test of time if passed into law. The professor, who condemned some terms used in the bill, said the laws passed by the Senate and the Houses of Assembly are meant to address issues, and that the technicalities are to be left to the experts.

“We have a whole document on Assisted Reproductive Technology, (ART). The committee should look at what exists in the state and improve on it. The present law, in its present form,I think should be stepped down.”

The founder of Met Surrogate Mothers Agency, Mrs. Olaronke Thaddeus, suggested that the bill should include surrogacy agencies as the latter are the registered practitioners that connect intending parents to surrogate candidates.

Highlighting that the rights of women and children must be protected as they are the key candidates in surrogacy, Dr. Ivie Omoruyi of the Blossom & Oasis RHS, opined that children and women must be factored in the bill.

On her part, Mrs Toyin Lolu Ogunmade, who got twins from surrogacy, shared her story of how she could not conceive as a result of fibroid.

She said, “I had to contract a surrogate mother because I couldn’t conceive a child because I had fibroid. At that time, nobody wanted to do surrogacy for me and there was no way I could get a family member or friend to do it.

“I waited for 12 to 13 years. I went to India and an Indian helped me to carry my twins, who look so much like me. They are not Indians and they still have a relationship with their surrogate mother.

“I have been helping people to reduce stigmatization. It is not anybody’s choice to go through surrogacy. I can have a child; I only had a problem with my health. The bill will cause more damage than good.

“The bill would promote what we are trying to avoid such as trafficking or baby factory. We are ready to partner with you. I have spoken about it and even wrote a book about it.”

Dr Faye Iketubosin, past president of the Association of Fertility and Reproductive Health condemned the terminologies used in the bill. He said, “I worked with a committee that worked on the practice of ART in Lagos State. We worked for four years to generate a document on ART in the state.

“We have been self-regulating. There is something to amend on almost every page. A committee involving the practitioners and stakeholders should come together and work on the bill. Let us enact the right law for the society.

The Chairman of the Committee of Health Services,Hon. Sokunle Hakeem, assured the stakeholders that their observations and opinions would be accommodated in the bill. He said, “I must sincerely confess here today that the proposed law is long overdue in our system considering the series of controversies and litigations associated with human fertilization and surrogacy-related matters in our society.

Let me assure you today that I have no doubt in my mind that this bill under consideration if eventually passed into law would pro6a legal framework to regulate the procedure and practice of surrogacy, monitor the procurement,processing,storage, distribution, use of gametes and embryos in the state to prohibit commercial exploitation.

Secondly, the proposed law would also ensure that the best interest and right of any child born out of surrogacy are protected in accordance with the provision of Child’s Right Law of Lagos State.”

Earlier the Speaker of the Lagos State House Of Assembly who was represented by Hon. Desmond Elliot, the member representing Surulere constituency I noted that the proposed law would give a ‘human face’ to the practice by experts in the field and add to the advancement of Lagos.

“Lagos State has consistently grown since 1999 when we birthed the current democracy. Today, we remain proud to say that we are in a State that has become a good example to others in terms of governance, advancement in thoughts and actions and good leadership.

“The bill being discussed today is another example of good thinking and effective leadership,” the Speaker said.

He promised that the opinions and contributions of the stakeholders including those from the Assisted Reproductive Technology (ART) sector would be considered by the House in passing the bill.

Hon. Victor Akande, chairman of the House Committee on Judiciary, Human Rights, Public Petitions and LASIEC while giving an overview of he bill said the proposed law was to help ensure that surrogacy is practised responsibly and in accordance with the law.

As well as availing the surrogate mother, the child that came to be owing to the surrogacy and the patients legal covering from stigmatization and untoward actions.