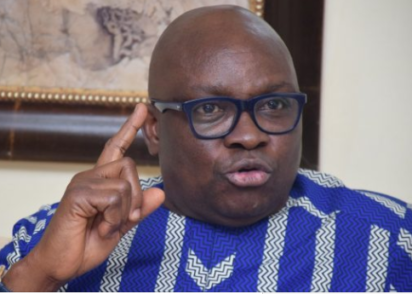 Ayodele Fayose, governor of Ekiti state has insisted on implementing the anti-open grazing law despite opposition from the federal government.
Recall that the Minister of Defence, Mansur Dan Ali, had on Tuesday at a security meeting with President Muhammadu Buhari called on some States to suspend the ant-grazing law.
At the meeting, Dan Ali stated that the anti-grazing law is creating unnecessary tensions in States where it has been passed. He said there is the need to negotiate safe routes for the herders.
Reacting to the call, Fayose in a series of tweets said the call by the minister was an affront to federalism in the country.
The governor said the federal government should be concerned with finding a way of taking the herdsmen out of the bush in view of giving them a better a better life through ranching.
“Call by the FG through the minister of defence, Dan-Ali that States should suspend implementation of the anti-grazing law is an affront on federalism that is being practised in Nigeria. It is amazing that at the level of the presidency, they still see States as appendages of the FG,” he tweeted.
“January this year, the minister of defence blamed passage of anti-grazing law in some States as the cause of killings by herdsmen. Today, he is still singing the same song. Is there something to this old system of nomadic cattle rearing that they are not telling Nigerians?

“Why is @MBuhari not rearing his cows through open grazing? Why is it so difficult for the FG to support cattle ranching? Here in Ekiti, the anti-open grazing law stays. It is the presidency that should stop looking the other way while herdsmen go about killing Nigerians.
“I think the Presidency should be concerned about how to take the herdsmen out of the bush and give them decent life by embracing cattle ranching. How can anyone be pleased subjecting his own people to a life of following cows through the bush from Yobe to Lagos?”