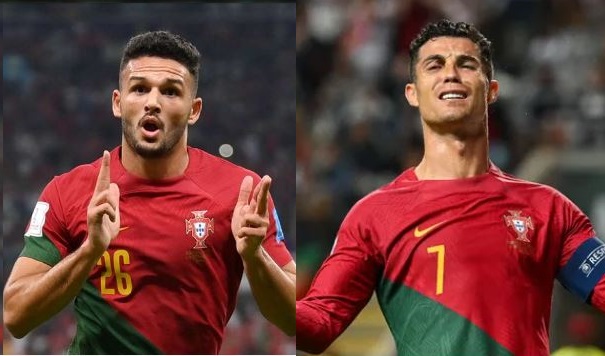 Portugal head coach Fernando Santos on Tuesday night made the brave decision to drop his talisman Cristiano Ronaldo for his side’s round of 16 clash with Switzerland at Qatar 2022 World Cup.

The 68-year-old tactician had instead turned to the 21-year-old Benfica forward Goncalo Ramos in replacement for his captain.

Interestingly, the Benfica forward had not only justified the show of faith bestowed on him by his manager, but he took it emphatically miles ahead by hitting a hat trick to become the first player at Qatar to achieve the feat.

Ramos had fired home a formidable shot from a tight angle just 17 minutes into the context to hand Selecao das Quinas the lead.

The youngster then doubled his tally a few moments after the half-time break, finishing Diogo Dalot’s low cross at the near post.

And, not long after, he dinked a shot beyond Yann Sommer to score his third and Portugal’s fifth to break Qatar 2022 hat-trick’s deadlock.

Remarkably, Ramos hat-trick means that the young sensation has scored more goals (3) for Portugal in the World Cup knockout stages after 17 minutes than Ronaldo has in 514 minutes played in the competitions knockout rounds (0), as per Opta.

And, in total, he has already scored four goals in only four international appearances.

U.S. scientist reveals how COVID-19 was genetically modified in China