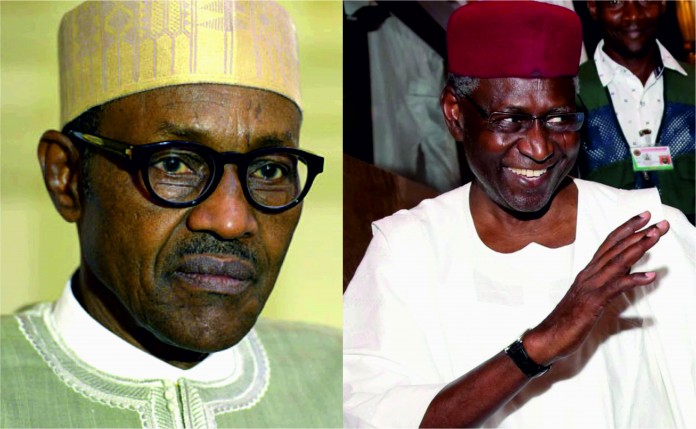 PRESIDENT Muhammadu Buhari recently repeated he won’t shield any sleazebags in his administration. Many Nigerians would have taken him for his words except for some in his government: his Chief of Staff Abba Kyari, who is widely perceived to have become a stumbling block in the anti-corruption war of the present administration.

It appears the president has got his hand so filled with bigger problems, particularly the militancy in the Niger Delta, that he chooses to let his COS, who many believe is working against Buhari’s anti-corruption agenda, run the show.

Kyari, sources within Aso Rock say, is now Buhari’s alter ego, coordinating ministries, boards, agencies, and bringing whatever documents he wants signed to the president, including those that might cost the administration its integrity.

The latest is how the COS dusted off the papers of a deadbeat company to be used as a Special Purpose vehicle to immediately commence business with the Nigeria National Petroleum Corporation (NNPC) where he is a board member.

According to a letter SaharaReporters obtained, Kyari has been fronting for the Valiant Offshore Contractors Limited (VOCL), a private business equally fronted by Uwamur Adolor, the major owner of SeaWolf Oilfield Services Limited.

Seawolf is the single biggest debtor to the Asset Management Company of Nigeria (AMCON). It owes First Bank of Nigeria about N160 billion, and the asset management corporation had to seize the SOS assets, including two oil rigs now parked at Marina, Lagos.

“Sources knowledgeable about the deal revealed that as a result, the COS has been piling enormous pressure on AMCON to give Seawolf a clean bill of health so that it can resume business as a drilling services company with the NNPC without meeting its debt obligation to AMCON,” the online newspaper reported.

Adolor, according to the report, took loans from banks and frittered them on automobiles using Seawolf. He was also said to have secretly formed the Valiant Offshore Contractors Limited, which Kyari is pushing to seal mega oil deals from the NNPC.

Of course, the COS believes First Bank was to blame for giving out the loan to SOS—not the debtor and promoter of the new business whose heavy indebtedness to AMCON should have disqualified him.

Although AMCON has reportedly replied Kyari VOCL would not be given a pass without paying off the debt it acquired through Seawolf, many believe it’s just for a while. The COS is a man who usually takes no for an answer when it comes to helping his cronies.

He saved Interior Minister Abdulrahaman Dambazzau’s skin when the interim reports of the Arms Procurement Investigation Committee Buhari set up dragged the minister into the N185,843,052,564.30 and $685,349,692.49 scam.

The EFCC has been digging into the scam, but it’s not been making much headway because of its run-ins with Kyari who is now fighting a proxy war with NSA Babagana Moguno, another right-hand man of Buhari’s.

And for that, Magu has particularly become Kyari’s prime target for going after all the associates of his embroiled in the $2.1 billion Dasukigate scandal.

Recently, Kyari frustrated Magu’s effort at recovering evidence to investigate Sahara Energy Group, another concern in which the COS has interest.

It was also reported Kyari was going to advise Buhari to ease out the EFCC chair after the commission compelled Nduka Obaigbena to return the over N600 million he got from exNSA Sambo Dasuki on behalf of the Newspaper Proprietors Association of Nigeria in the run-up to the 2015 election.

Analysts believe the many antics of Kyari are obviously preventing the anti-corruption fight of the Buhari government from getting the necessary commendation.

The intrigues, however, might not be hidden to the president, many believe. But the problem is Buhari has got so much taking his attention. Especially the Niger Delta unrest which is more pressing to him now.

As the “Operation Moses” put together by the Movement for the Emancipation of Niger Delta’s Aaron Team 2 in conjunction with the federal government begins Monday, and will end Friday, there is no apparent let-up yet in the on-going insurgency across the Niger Delta.

Buhari once confessed he was at a loss on how to go about resolving the Niger Delta militancy which has reduced oil production by 300,000 barrels daily.

He must be a more confused man by now that his options are somewhat limited. To start with, restructuring Nigeria at this moment is not his government’s priorityand not his party either.

“Nothing is wrong with the idea,” APC’s Chairman John Odigie-Oyegun said after former V.P Atiku Abubakar stoke the issue of restructuring Nigeria in July.

“But at this time…to bring this additional issue (restructuring) is not the wisest thing for a nation that is struggling to stabilise. It is not wise to go into an unnecessary diversion at this point,” he said.

It just might be unwise still for Buhari that sweats to be seen as clean to blink over the undue influence of the head of his backroom boys, and watch Kyari derail the agenda of the government he serves as COS.