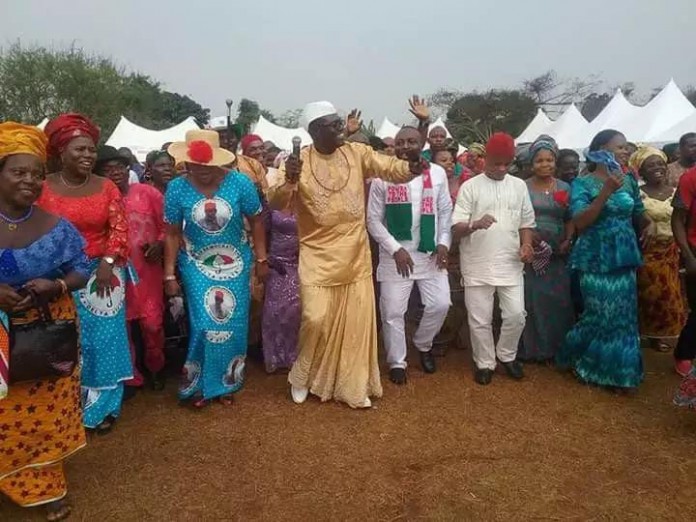 Share this on WhatsApp
Spread the love
The former Governor of Delta State, Chief James Ibori, has since he returned from the United Kingdom been reaping from his legacies in the state. Thousands of political actors who abandoned the Peoples Democratic Party (PDP) while the former governor was away, have been returning to the party with the speed of light.
National Daily gathered that former Governor Ibori has since arrival from the UK, been moving around the state, strengthening the PDP and rebuilding confidence in the party.
The former governor has been enjoying unusual monumental goodwill from people since he came back to the country.  The goodwill has been facilitating his interactions with people and making him gain listening ears of political actors in the state.
Ibori has gone far in reconciling PDP members in Urhobo nation, in particular, and other ethnic climes in the state.
Thus, a massive defection was recorded last Saturday at the welcome back rally organized by loyalists of the former governor at different parts of the state.
The All Progressives Congress (APC) in Delta State suffered devastating loss of members who resolved to re-unite with their political principal in the PDP. Thousands of APC members had defected to the PDP in Ughelli North and Aniocha North local government areas.
It was highlighted that, “In Delta State, it is believed that Ibori is the political godfather of the state and whichever party he joins, the greater number of the people of Delta will move along with him.”
Apparently, one week after the return of Ibori, a renowned APC propagandist who run down Governor Ifeanyi Okowa during the electioneering campaign and court cases, Fred Latimore, dumped the APC for the PDP, giving flimsy excuses for his defection.
Spokesman of the defectors in Ughelli North, David Ughelliyovwe, explained that they decided to defect from the APC because they had seen light in the PDP, acknowledging the good works of the House of Assembly member in the area, Eric Oharisi.
Ughelliyovwe had celebrated the PDP and Oharisi as good political commodity, a development which led to the members of the APC in the local government joining the PDP massively and pledging to remain faithful to the party and working with the state government.
Oharisi, who received the decamping members, encouraged them to be consistent in their belief in the PDP that they will always be carried along in the administration of Dr. Ifeanyi Okowa.
Also, in Aniocha North, a notable member of APC and his supporters, Emmanuel Baxim Chinye, defected to the PDP and were received by the State PDP Chairman, Kingsley Esiso.
Share this on WhatsApp