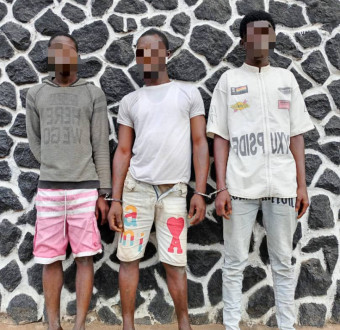 Three robbers caught in their territory around Ketu, Ojota and Berger areas of Lagos State have explained why they succeeded for long in robbing Lagosians.

The suspects identified as Segun Olaiya, Ayinde Waris, and Bashiru Mohammed were arrested while robbing some passengers at Ketu.

“We always attack travelers to Lagos because they are very easy to rob—not smart like the Lagosians,” Ayinde said.

According to the state Police Public Relations Officer, Benjamin Hundeyin, on Wednesday, operatives of Ketu Division on Monday arrested the three members .

Their traffic robbery gang is notorious for dispossessing motorists of their belongings at Ile-Iwe/Kosofe, Ikorodu Road, in Ketu area of the state.

“The suspects are currently assisting the police in an investigation to arrest other members of their gang. Suspects would be arraigned at the conclusion of investigation,” he said.