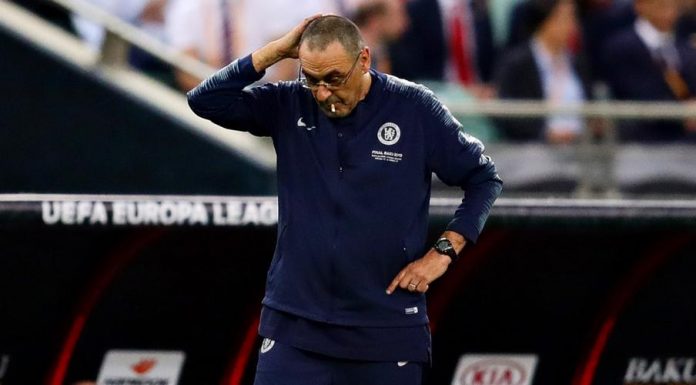 Maurizio Sarri is set to return to Italy to take the vacant managerial role at Juventus and bring the curtain down on a fretful one-year stay at Chelsea.

Sarri met his targets by returning Chelsea to the Champions League via a third-place finish in the Premier League and winning the Europa League, claiming his first major trophy as a coach in the process.

However, a failure to connect with the Chelsea support, public criticism of his players and a refusal to adapt his style of play meant Sarri was always unlikely to hang around for a second season at Stamford Bridge.

The 60-year-old former banker becomes the ninth full-time manager to leave Chelsea since Roman Abramovich took charge of the club in 2003.

Yet, for once the Russian didn’t wield the axe and waited instead until Juventus agreed to pay the compensation to free Sarri from the final two years of his contract on Thursday, according to reports in England and Italy.

The Italian champions are keen on the brand of football Sarri imposed during three years at Napoli when only Juventus’ remarkable consistency prevented the Neapolitans a first league title since the days when Diego Maradona graced the San Paolo pitch.

However, Sarri failed to transport that free-flowing football to Chelsea, despite making midfield playmaker Jorginho his first signing.

After a 2-0 defeat at Arsenal in January, Sarri labelled his players “very difficult to motivate”.

Worse was to come as a 4-0 thrashing at Bournemouth was followed by a 6-0 demolition by Manchester City — Chelsea’s heaviest defeat in 28 years.

The players soon started rebelling too. Goalkeeper Kepa Arrizabalaga refused to be substituted towards the end of the League Cup final to stay on the field for a penalty shootout, which Chelsea lost to City in February.

Supporters also voiced their frustration, calling for Sarri’s sacking, during a controversial 2-1 win at relegated Cardiff a month later.

ALSO READ:Eden Hazard leaves Chelsea for Real Madrid in move worth up to  £130M

Sarri, though, did manage to end on a high as Chelsea lost just one of their last eight Premier League games while the other contenders for a top-four finish stumbled towards the end of the season.

Eden Hazard then bade farewell in fitting fashion by scoring twice in a 4-1 rout of Arsenal in the Europa League final to ensure Chelsea again ended the season with a trophy despite the turmoil.

Yet, that will be an even tougher test for Sarri’s successor without Hazard, who joined Real Madrid earlier this week for a fee in excess of 100 million euros ($113 million).

Chelsea currently cannot recruit a replacement with the club serving a two-window transfer ban handed down by FIFA.

The club’s record goalscorer Frank Lampard is the favourite to return to Stamford Bridge after just one season in management at Derby County.

Lampard, 40, led the Rams to the Championship playoff final where they fell just short of a return to the Premier League.

The former England midfielder will not suffer any of the hostility encountered by Sarri in the Chelsea fan base.

But it represents a huge gamble both for Lampard so early in his managerial career to take the huge step up to a top-six job, and for a club in the transition to back a rookie manager.