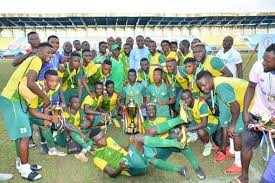 Share this on WhatsApp
Spread the love
The Governor Ifeanyi Okowa’s pre-season tournament came to an end last Thursday with the Harmony Boys triumphing over Lobi Stars Football Club of Markudi via penalty shootout to emerge winners of the tournament.

Kwara United is now the champion of the maiden edition of the Governor Okowa pre-season tournament with the team’s goalkeeper, Emmanuel Iwu, emerging the best goalkeeper of the tournament.