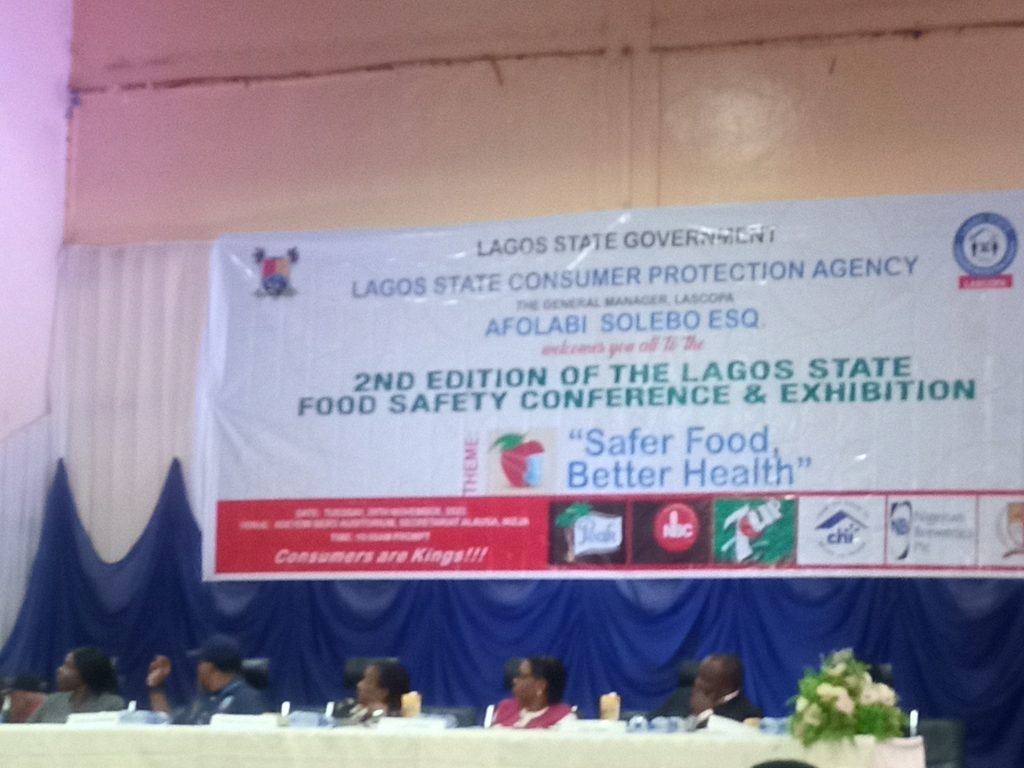 The Lagos State Government has reiterated its commitment to food safety and reduction of food contaminations in the state.

The Lagos state Commissioner for Commerce, Industry and Cooperative, Dr Lola Akande, made this known at the Second Edition of the Lagos State Food Safety Conference & Exhibition at Alausa, Lagos on Tuesday.

The News Agency of Nigeria reports that the theme of the conference was: “Safer Food, Better Health” which was organised by the Lagos State Consumer Protection Agency (LASCOPA).

The commissioner warned consumers against patronising roadside food vendors, saying such foods could be harmful if not properly cooked in an hygiene environment.

“There are many risks associated with street food which can have unhygienic vending practices, inappropriate storage of food, and also the use of contaminated water.

“Poor environmental sanitation, inappropriate waste disposal system and lack of potable water are some of the factors militating against food safety.

“When people stop patronising roadside food vendors, it will save them a whole lot of money spent on treating unnecessary ailments,” she said.

The commissioner said the state had zero tolerance to infringement of consumer rights and all forms of unfair trade practices by producers and manufacturers in the state.

Akande noted that there was an enabling law that could prosecute manufacturers, companies and traders that violate the right of consumers through conscious sales of unwholesome products.

She said that LASCOPA was established to address public complaints ranging from expired products and unfair trade practices usually perpetrated by manufacturers and marketers of goods and services.

The commissioner urged consumers to take advantage of the existence of the agency to lodge any complaint they might have on infringement of their rights, reiterating that the services of the agency was free.

In his welcome address, the General Manager of LASCOPA, Mr Afolabi Solebo, said food safety was necessary considering the ripple effects which unhealthy and unwholesome food items could cause to the human body.

The general manager said this could lead to death and in some other instances could bring about life threatening ailments.

He said: “It behooves on concerned stakeholders in reiterating that food safety is one of the most critical guarantors for good health as unsafe foods contribute to poor conditions.

“This can lead to impaired growth and development, micronutrient deficiencies, non-communicable or communicable diseases and metal illness.

“To this end, food vendors must comply with international food standards and engage employees, suppliers, and other stakeholders to grow and develop a food safety culture.’

Solebo noted that the agency had consistently encouraged consumers to freely seek redress and get compensation if the need arise.

He anticipated that this 2nd edition would produce the right ingredients to improve on its strides and contributions in achieving a better health through safe foods in the state in line with the THEME agenda of the state government.

Henshaw, also the Country Ambassador of Global Harmonisation Initiative (GHI), explained that street food vending was the major causes of food poisoning in the country and worldwide.

She noted that no fewer than 600 million people suffered from food poisoning worldwide annually, adding that in Nigeria alone, about 2.4 cases were reported.

Henshaw regretted that there was high level of under reportage of such cases, especially in the rural, hence the need for the various tiers of government to put the machinery in place to regulate the sector.

The don, however, argued that food operators could not be completely banned since the business contributes to poverty alleviation in the country.

According to Henshaw, consumption of street food in the country has been on the rise as a result of rapid urbanisation, adding that it provides ready to eat food on the go.